Warriors pick up first win of the season in convincing fashion 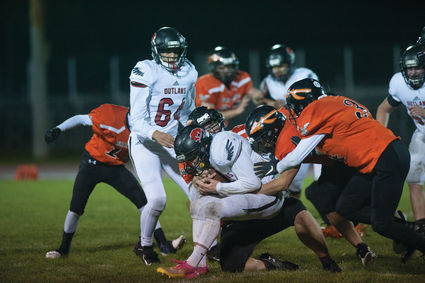 The Warrior defense swarms to the Rawlins ballcarrier during Worland's 34-6 win on Oct. 4 at Worland High School.

WORLAND - Starting 0-4 on the season was tough for the Worland Warriors football team but they were able to push all of that aside and pick up their first win of the season against the Rawlins Outlaws on Oct. 4 at Worland High School.

Not only did the Warriors get their first win of the season they did so in dominating fashion on homecoming week, rolling the Outlaws (0-2 3A East, 3-3 overall) 34-6. Offense, defense and special teams, the Warriors controlled all three as they picked up a crucial 3A East victory.

"If we can be focused and limit the turnovers and penalties, things that have plagued us in the past, it made all the difference. If we can get rid of those or limit them we put ourselves in a good spot to win. I tip my hat to the kids for believing and playing hard, especially with all the distractions of homecoming," said WHS football coach Ryan Utterback.

Even though they didn't score in the first quarter the Warriors were winning the field position battle. In the second quarter junior quarterback Rudy Sanford punched in Worland's first score with a 14-yard run, a missed PAT made it 6-0 Worland.

After forcing Rawlins to punt on the game's following possession, senior Luke Mortimer fielded the ball, found the edge then a cut back lane to the end zone for a 69-yard punt return. The Warriors went for two and converted when they used a little trickeration with the swinging gate formation. Sanford connected with Mortimer on a pass to make it 14-0.

Rawlins' next possession soaked up a much of the second quarter before they turned the ball over on downs, giving Worland possession at their own 30 with 1:02 remaining in the first half.

The Warriors put together an impressive two-minute drill and were able to score when Sanford found Mortimer on a fade in the corner of the end zone with two seconds left in the quarter. A successful PAT gave Worland the 21-0 lead heading into halftime.

After trading possessions to start the second half, the Outlaws cut into the Warrior lead making it 21-6 after the missed PAT. With a bit of motivation and promise of a comeback, senior return man Devon Mercado took the kickoff, found a crease and hit the NOS for an 81-yard touchdown return, crushing Outlaws' hopes of a comeback in the process.

Forcing the Outlaws into another turnover on downs, the Warriors capitalized by scoring again, increasing their lead to 34-6. Two possessions later the Warriors were in victory formation to close out the game.

Everywhere you looked each Warrior unit excelled against the Outlaws. The two touchdowns by the special team unit pushed their total to three in two games.

"We really feel good about some of the athleticism we have out there and we've worked hard to use that as an opportunity to gain field position or score. Special teams can end up being big factors in games. We put a lot of effort into it and have been taking advantage of that in the last couple of weeks. As a result, we've put points on the board and it has put some wind in our sails for our team," said Utterback.

Defensively, the Warriors removed Rawlins' best offensive weapon Kadin Forney out of the game and made them throw the ball, which allowed for Mercado and sophomore Jorey Anderson to pick off one pass each.

"We came together as a team and were rushing around the football. They had a talented running back that we wanted to contain. They had to air it out and that was the matchup we liked with the athletes we have out there in space. We have a bunch of guys that can break well on the ball and make things happen. It was a good effort by everybody. We bent but did not break," said Utterback.

Offensively, a key to the game was the Warriors' success in the red zone and the one drive that showed that best was their final possession of the first half. For a team that has had their struggles in the red zone this season, driving 70 yards in under a minute and putting up seven is a huge confidence booster.

"The kids were focused and we had some good momentum going and we knew that if we could get another score it would set us up nicely for the second half. We were being aggressive and going for it and we got it in there," said Utterback when talking about the final drive of the first half.

Sophomore running back Taylor Pierce led the team in rushing yards with 106 on 23 carries. Pierce's tough running allowed for the Worland to salt away the win. Mortimer led the Warriors in defensive points with 17.5 points with four pass breakups, a fumble recovery, an assisted tackle, unassisted tackle and .5 tackle for loss, and receiving yards with five receptions, 61 yards and one touchdown

The Warriors turn their focus toward the Douglas Bearcats (2-0 3A East, 4-1 overall) who sit atop the 3A East and visit Worland for a 7 p.m. game. Coming off a big win, Utterback likes the momentum that his team is carrying into Friday's game.

"It was a key win for us and gives our guys some confidence heading into a big game against Douglas. Douglas is picked to win the 3A East and they're coming to our house. I think that's an advantage for us and we've got a really supportive community behind us. Hopefully, that's something we can take advantage of and we can feed off of on Friday," said Utterback.