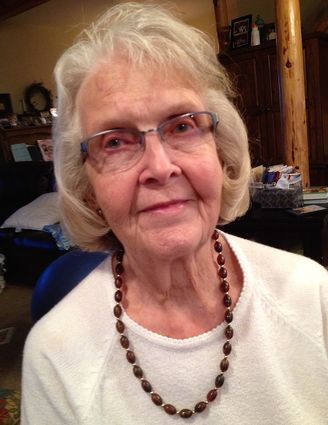 Bernice Lucille Stine, 89, went to be with the Lord on Wednesday, October 23, 2019 at the Washakie Medical Center in Worland, Wyoming surrounded by family. Bernie was born in Worland, WY on June 25, 1930 to Adam and Elizabeth Lungren. She was the eighth child out of ten children. She grew up milking cows and bucking hay on the family farm and enjoyed hunting and fishing with her dad when she wasn't doing chores. She graduated from Washakie County High School in 1948 and married Robert William "Jack" Stine in December of 1948. They moved to Cheney, Washington as Jack was attending school.

Bernie's faith in Jesus was the most important part of her life. She was very active as a youth leader for Zion Lutheran Church. She was the unofficial welcoming committee at Zion as she loved to welcome new people. Bernie was also very active in Christian Women's Clubs in Worland and surrounding areas and was very involved in speaking and growing Christian Women's Clubs at the local and regional level. She was a real prayer warrior and her house always had an open door.

The Stine family went camping every weekend in the summer and hunted at the Lungren family ranch. Bernie enjoyed bowling in a weekly league. She will be forever remembered by her grandchildren as she had special songs to calm them down or put them to sleep. They have enjoyed watching their family grow to now include 10 grandchildren, and 28 great-grandchildren. Jack and Bernie celebrated nearly 70 years of marriage in September of 2018 with almost all their immediate family present.

Bernie worked at various jobs including Reed's Drug, Merz Bakery, Graham's Drug, dental assistant to Dr. Brown, and most notably school cook and head cook for the Eastside school. Even at school, Bernie had an open-door kitchen, as she would feed kids that would show up early with a slice of cinnamon toast. Bernie loved spending time with family, and you would never go hungry when she cooked.

Bernie spent the last year under the care of Lisa and Dale Hartley. She loved going for drives to look for deer and eating at Maggie's café in Worland and at the Highway Café in Manderson.

We appreciate all the wonderful care she received from Washakie Medical Center Hospital in Worland.