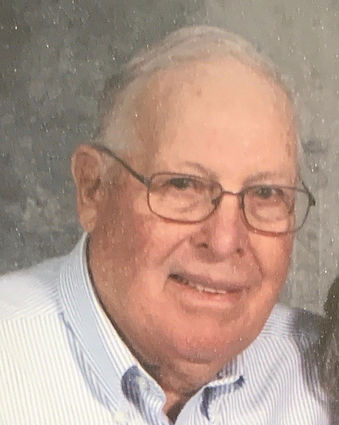 In the early morning hours on December 6th, 2019, at the South Big Horn County Hospital with "Little" Karen holding his hand, Roy Lloyd Frisbee, (91) of Basin, WY, passed away quietly and went to be with the Lord.

Roy, was born to Anna Wilhelmina (Thomsen) and Lloyd R. Frisbee on December 22, 1927 in Sioux Falls, South Dakota. He was the eldest of 6 children. Roy's childhood was during the Great Depression. Times were tough for the Frisbee family. Roy's father Lloyd fell ill and Roy quit attending his formal education after completing the 8th grade to work along-side his mother in the fields to help provide for the family.

In 1951, Roy was drafted into the Army, he was stationed in the Marshall Islands. During this time, testing of the atomic bomb on the Eniwetok proving grounds, was taking place. Roy spent most of his time in the military operating cranes loading and unloading barges and operating other equipment. He was honorably discharged at Camp Carson in Colorado on February 27, 1953.

After being discharged in February, and on the recommendation of a taxi driver, Roy and two of his buddies went to a dance studio in Denver, where he met, the love of his life, Virginia (Paumer). It was, love at first sight for both Roy and Virginia. They married July 22, 1953, in the Hyattville Methodist Church and had their reception, at the ranch, they would eventually own and operate. To this union they had two son's Dan in 1954 and Randy in 1956. In 1968, Roy and Virginia welcomed and raised two of Roy's nieces as their own, Joni and Karen (McFarland).

In 1957, Roy and Virginia moved to Basin to operate the Standard Oil Gas Station. They had an opportunity to move back to the ranch on the Paintrock in 1959 and purchased it from Virginia's parents Bill and Nellie Paumer. Roy and Virginia lovingly operated the W Bar P ranch for 41 years. They raised Herefords with the ever-changing markets switched to cross-bred cattle, but Roy always loved the Hereford breed best. Roy was a gifted stockman and was always kind to his livestock. He loved to reminisce about old times, fall roundups, bull buying trips and childhood stories.

In 2000, with a heavy heart and poor health, Roy sold their beloved ranch and returned to Basin where he spent his time wood working, playing his guitar, harmonica and accordion. He learned to play musical instruments by ear and playing and singing with his nephew was always a part of family get-to-gether's. In retirement, Roy enjoyed having lunch with the grandkids during the school year. This was a time which allowed for them to form a special bond. It helped to teach them the importance of family. He loved ALL his family, dearly. Attending grandkids events, traveling to Alaska and continued to operate farm equipment for Michael Vigil Farms Inc. until his health would not allow, yet this did not prevent him from staying informed on the current farming activities and cattle prices.

Roy belonged to the South Side Cattle Association for 41 years and at one time was the President of the Association. Roy was a member of the United Methodist Church, Lifetime Elks member since 1959 and American Legion member and served on the Manderson-Hyattville School board.

Roy was a quiet, humble man. He always wanted things to be neat and orderly. He was a responsible man, for example; he put down his car keys and voluntarily announced that he could no longer drive safely and that was that, no complaining, it was just a fact. Roy could fix just about anything. But most importantly he truly loved his family. He will be remembered for his kindness, his beautiful smile and warm personality and complete devotion to his loving wife, Virginia.

Virginia, was truly, the love of his life. They were married for 66 years and formed a true partnership in everything they did. They never spoke a harsh word to each other. They loved ranching, dancing, spending time with friends and just being together. It was so very hard for Roy to say goodbye to his true love. "We'll take good care of her Dad".

The family would like to thank all the caring staff at the South Big Horn County Hospital.

A memorial service will be held at 11:00am, December 13, 2019 at the United Methodist Church in Basin, 201 6th Street. A graveside service with military honors will follow at the Mount View Cemetery in Basin, WY Hwy 30. The family requests, in lieu of flowers that donations be made in Roy's name to the Basin United Methodist Church, 201 6th Street, Basin, WY 82410. Arrangements have been entrusted to Atwood Family Funeral Directors.