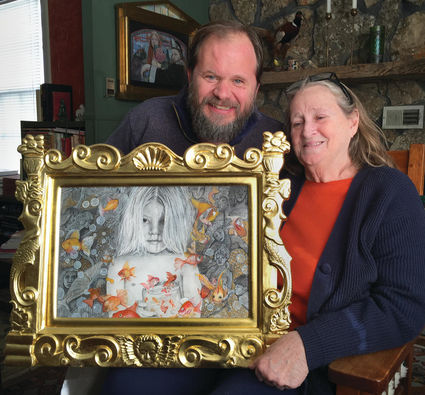 Bryant and his wife AB Word pose with one of his favorite frames he carved and gilded in a Sansovino-style, which is based on one held in the Robert Lehman Collection at the Metropolitan Museum of Art in New York. Bryant and his wife's picture and frame featured here reside in a Central Florida private collection.

THERMOPOLIS – Art comes in many forms, and one of the more difficult forms to excel at is gilding, which long-time Kirby resident Barry Bryant has taken the time to learn, and succeed with in the last 20-plus years.

Gilding is a process that has been around for more than 4,600 years, and is where gold leaf, primarily 22-karat or higher yellow gold, is used in order to accent certain objects to embellish their appearance so that they are more valuable.

Bryant and his wife, artist AB Word, were born in Arkansas and lived there for most of their lives prior to deciding to point randomly at a map, and move to wherever it landed, which happened to be Kirby in 1994.

Bryant was an avid artist prior to moving to the Big Horn Basin, but five years after living in Kirby, he decided to learn a new way to help show off art, and began gilding frames for his wife to help the frames accent his wife's style of art.

"She is the reason I got into gilding in the first place," he said. "I did not know where gilding would take me when I got into it; it was hard to find out about it in 1999."

Word's style of art focuses more on an individual but places them in a fantasy setting, and shifted it to a more western-centered theme but added a unique twist onto portraits of individuals and western themes to give a new perspective.

Bryant has always been a photographer by nature, but since Bryant began gilding in 1999, they have traveled around the nation competing for prizes and being featured in different museums since they arrived in Wyoming such as the Nicolaysen Art Museum & Discovery Center in Casper, as well as at the Washakie Museum & Cultural Center and Hot Springs County Museum throughout Wyoming.

Bryant and Word have owned and operated Merglenn Studios located in Kirby since they moved to Wyoming more than 25 years ago.

Bryant joined the Society of Gilders in 2011 after being approached by Dr. Naomi Geller Lipsky, president of the society, at an art show in Florida where she noticed his gilding work being displayed.

This led to him being featured in an exhibition magazine for the society, and being asked to be an alternate trustee member several years later.

Bryant noted that travelling in recent years has become increasingly difficult due to the unforeseen health conditions his wife has run into since 2015. According to Bryant, most of these conditions have stemmed "due to allergies" to the environment, which has unfortunately seen Word get sick on multiple occasions to Florida.

One particular innovation that Bryant decided to debut in 2016, was hand-gilded paper, which saw Bryant gild the front of the paper, then cover it with a digital ground and then print an image on top of that.

"In November of 2016, I came to Worland and presented that (hand-gilded printing) at the Mammoth Quick Draw." Bryant said. "Then in January of 2017 I taught it at West Coast Art & Frame to an entire class of students."

With the recent struggles his wife has faced, Bryant decided to take a step back from being a trustee for the Society of Gilders one year ago.

Wyoming did not feature a Governor's Capitol Art Exhibition until 2000 under then Governor Jim Geringer, which Bryant felt as if he helped influence after noticing that most surrounding states featured such an exhibition each year exclusive to that state's artists.

"When you are a professional artist you are trying to find a way in any way you can," Bryant said.

Word also had a work featured years later, but the couple has not featured in the exhibition in over a decade. That will change this upcoming month as Bryant and Word made a stop in Cheyenne to submit works for the exhibition, which will be on display at the Wyoming State Capitol from Feb. 20 through Aug. 13.

Bryant and Word are currently in Las Vegas, as Bryant is currently teaching gilding for the third time at the West Coast Art & Frame Expo this week.