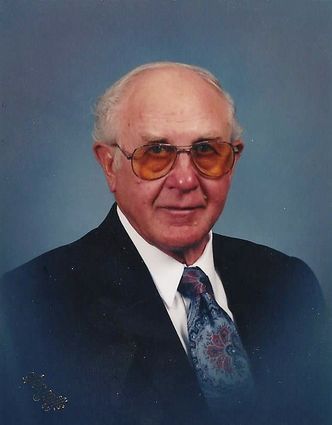 Lifetime Worland resident Lloyd Albert Lungren, Sr. died Feb. 19, 2020 in Billings, MT following surgery. His wife and children were at his side.

Lloyd was born March 18, 1925 on the L.E. Laird farm in Worland. He received his name when a gentleman named Lloyd Albert Buchanan drew the "shortest straw" and the honor of naming the new baby. His parents Adam and Elizabeth (Deines) Lungren came to America as Germans from the Volga area in Russia. He was the sixth of their ten children.

He attended Worland schools graduating from Washakie County High School with the class of 1944. He played the cornet in the band. He then attended the University of Wyoming with his lifelong friends George Muirhead and Clint Putnam.

On January 9, 1949 he married Ruth Jane Wamboldt of Belle Fourche, SD. They eloped after a month long courtship and were married in Billings, MT and recently celebrated their 71st wedding anniversary. They worked together raising their family with devotion to the Lord and instilling in each of them good work ethics.

Upon returning home he went into farming with his father and brother Ruben at their farm on South Flat. His agriculture career spanned an era from horse driven equipment to satellite operated tractors, from setting water with canvas dams and irrigation tubes to center pivot sprinklers, from labor intensive crops to crops free of labor and weeds. He utilized his mechanical ability to maintain and improvise equipment. He built the first beet top saving unit in the area. He was a Top Ten sugar beet producer and was a recipient of a Top Barley Producer award. He raised cattle at the ranch at Big Trails on the Upper Nowood and in the Lost Creek area of Washakie County. He loved his mountain land. He enjoyed the ranching side of his life and was once nominated to the Cowboy Hall of Fame.

He was a ceaseless worker never putting duty aside. He instilled this same virtue in his children and grandchildren always leading by example. He was still closing ditches and packing silage last fall. He made daily trips to the farm always lending a helping hand. He taught many of his grandchildren to drive enforcing the rule of "never back up further than you need to".

He was baptized and confirmed at Zion Lutheran Church and was a devout and faithful Christian.

He is survived by his wife Ruth of the family home at 801 Charles, his sons Lloyd A. Jr. (Maria), Gregory (Margaret) and Vance (Debbie) all of Worland and his daughter Victoria (Gregg) Olson of Hurricane, UT. His sisters, Dorothy Scheuerman of Worland and Sharon (Bruce) Perryman of Cheyenne, WY. And many nieces and nephews.

Services will be held at Zion Lutheran Church on the corner of 15th and Circle Road in Worland with Dr. Roger Dobson officiating. The service will be held on Thursday, February 27, 2020 at 10:30am with burial to follow at Riverview Memorial Gardens. A luncheon will follow at the Fellowship Hall. Memorials may be made to the Zion Lutheran Zest program. Arrangements have been entrusted to Veile Mortuary.