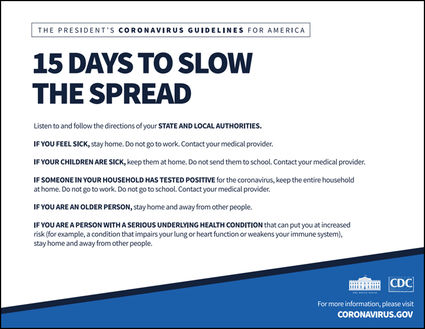 The Washakie County Emergency Management Team through a letter is notifying some businesses about a proposed order issued by Governor Mark Gordon on Wednesday, March 18.

The state count is at 18 positive cases as of Wednesday, in five counties -- 4 in Laramie (two new cases Wednesday identified in Cheyenne), one in Park County, eight in Fremont County, four in Sheridan County and one in Teton County. See details below on the three newest cases.

The proposed state order further states that "whereas it has been determined that a method to control the community spread of the coronavirus is to close certain public places; and ...

"Whereas, per the new guidelines issued from the White House Government as of March 16, 2020, that with evidence of community transmission, bars, restaurants, food courts, gyms and other indoor and outdoor venues where groups of people congregate should be closed

Restaurants may remain open if a restaurant notifies Jamie George the health inspector and follows certain procedures including prohibition on all dine-in food service, allow curbside take-out or drive-thru food service and discouraging the customer from using cash."

The Washakie County Emergency Management Team is advising the businesses listed above that the State Health Officer may at any time choose to make these recommendations an order and that order must be obeyed.

The letter was being delivered to all the businesses in Washakie County that fall under the list, to Worland City Hall and to the Ten Sleep Town Council which was meeting at 5 p.m. Wednesday night.

Earlier in the week several restaurants in Worland had already closed to dine-in seating and were only allowing drive-thru including Taco John's and McDonald's. The Worland Health Club was remaining open prior to this recommendation. The Worland Aquatic Center, Community Center and Washakie Museum had announced they would be closed.

The Washakie Twin Cinemas had announced they were remaining open with limited seating. Again that was prior to this recommendation.

Check this website, wyodaily.com, for updated information as it becomes available.

You may see the full order from the Dr. Zimmerman on our website at https://www.wyodaily.com/home/customer_files/legals/washakie_county_pub_hel_letter_to_resdence_and_businesses.pdf

Per the Wyoming News Exchange through Wyoming Community Newspapers -- As businesses across the state voluntarily shut their doors temporarily. Gov. Mark Gordon said he would leave the decision on whether to order the closure of bars, coffee shops and other places where people congregate up to individual counties.

Gordon on Wednesday issued a statement supporting the coronavirus recommendations issued by President Donald Trump for people to avoid social gatherings of more than 10 people and to avoid eating or drinking in bars or restaurants.

The recommendations prompted Teton County’s Riddell to order the closure of bars, fitness clubs and other places where more than 10 people might gather. The order allowed restaurants to stay open for curbside takeaway and drive-through service.

Gordon’s spokesman Michael Pearlman said the governor would leave such decisions in the hands of county officials.

Gordon said he realized such decisions could be difficult for Wyoming’s residents.

“These are going to be perhaps the toughest times any of us will see in our lifetimes,” he said. “Although absolutely necessary, I recognize the toll these measures will take on those most dependent on a working wage. But by working together and practicing good hygiene, kindness and charity, we can keep vulnerable adults healthy, avoid overwhelming our health care system and support those most in need.”

The recommendations prompted Teton County’s Riddell to order the closure of bars, fitness clubs and other places where more than 10 people might gather. The order allowed restaurants to stay open for curbside takeaway and drive-through service. 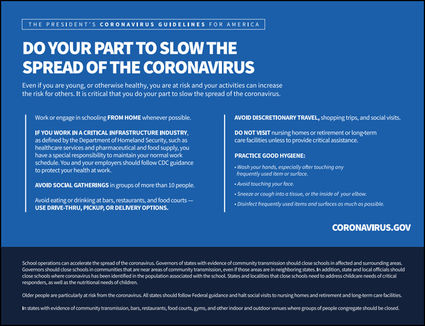 The member had just returned from out of state. To limit exposure to others, the individual followed all prescribed precautions, self-isolated and sought out medical attention in the local area immediately upon their return and never came onto base.