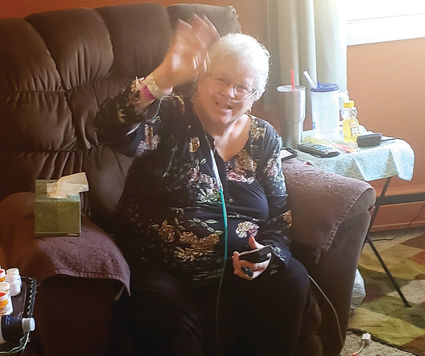 Lory August waves to the camera as she settles in back home in Worland after being released from Hot Springs County Memorial Hospital. August was Washakie County's first confirmed COVID-19 case.

WORLAND - Grateful to be alive, Lory August of Worland, Washakie County's first COVID-19 case, shared her story Friday of her recovery, a day after getting home.

After a 16-day stay in the Hot Springs County Memorial Hospital in Thermopolis, August was released to finish her recovery at home in Worland.

Her message to everyone during the COVID-19 pandemic, "You can beat this, be positive, you can survive."

Lory August has been battling cancer on and off for three years. She has diabetes and a compromised immune system due to chemotherapy treatments she is currently undergoing.

For 10 days in March she self-isolated at home thinking she had pneumonia. She was officially diagnosed with COVID-19 on March 26.

Lory August said she and her husband Dan were in Omaha, Nebraska for meetings. She wasn't feeling well. She said they were staying in a motel and the room was hot they were running air conditioning. On Saturday she felt worse so they drove straight home to Worland on Sunday, March 15.

She said she felt like she had caught pneumonia, noting she catches pneumonia easily.

"I weathered it through the week," she said. Her daughter Shealynn August arrived from Louisiana with her children.

Lory August said since she was coughing, and thinking she had pneumonia she quarantined herself to her room. "I didn't want them to get pneumonia."

She had contacted her "cancer doctor" Dr. Sameh Abuerreish, MD, on March 17 and he ordered a CT scan to "see what was going on. He also gave her a prescription. The CT scan was scheduled for Thursday, March 19, when she was to have her next chemotherapy treatment. "I had a fever and I didn't feel well enough to travel," Lory August said, noting she doctors in Thermopolis with Dr. Hallie Bischoff.

She "weathered through the weekend," and on Monday, March 23, she called the Hot Springs County Memorial Hospital to set up the CT scan. It was scheduled for Tuesday, March 24, Dan and Lory's 41st anniversary.

The scan showed her "lungs were full. Everything was a mess." She was moved to an isolation room and tested for influenza, strep and a few other viruses, all of which came back negative.

"They put me in an isolation room right off the bat. I couldn't have contact from anyone from the 24th on," Lory August said. She noted that her symptoms were that of pneumonia, which she did contract through the virus – cough, fever and tightness in her chest.

She was then tested for COVID-19. The test came back positive on March 26.

Did it ever cross her mind she had novel coronavirus? No.

Shealynn August said, "It didn't cross any of our minds. None of us were thinking coronavirus, because we are good at social distancing here and she (Lory) gets pneumonia easily with the chemo."

DARKNESS BEFORE THE DAWN

Lory said she was told by her health care providers three times that she likely would not make it, but she kept fighting and people kept praying.

"I got told I was going to die three times, that it was that bad, because of my immune system, and because of my diabetes and cancer, I probably was not going to make it, I just wasn't strong enough."

Despite the dire warnings Lory never felt this was the end for her. "I never got that overwhelming feeling. Jesus had a purpose for me. I was not going nowhere. I just knew in my heart. I just fought."

And, she fought alone, except for the health care providers at the hospital. Her family had to quarantine for 14 days. They were released from quarantine on Tuesday, April 7.

"We could only see her via FaceTime or if we drove over to Thermopolis to stand outside of the construction area and wave to her from the window, which was 20 feet away or so. She wasn't able to open the window due to the special isolation she was in, so we talked to her on the phone while seeing her at the window," Shealynn said.

"God sent the nurses and doctors, medical care and love, to stand in the gap for us," she added.

"It was a rollercoaster until she had her turnaround. We [as a family] had to decide her final medical wishes three times." Shealynn said the family was asked if they wanted Lory to be intubated or just on oxygen. "The family was at peace to keep her on oxygen. It would either be a miracle from God or she would go peacefully."

"I was burdened many times my mom would die alone in the hospital, but God encouraged my heart he was bringing her a miracle and I also prayed everyday God would comfort her and help her not feel alone but to feel him close to her," Shealynn said.

While Lory thanks the doctors and nurses for going above and beyond, she also praises God for her recovery. She said, "I got a miracle from God or I would not be here. It's thanks to Jesus I am home."

Lory said the turnaround came about a week before her release. Shealynn said the doctors put Lory on high-flow oxygen and that is when they began to see improvement.

Lory said, "The doctor told me the machine was breathing for me and I had to fight if I wanted to breathe on my own, which I did. I did every day. I did all the medicine, the breathing treatments."

She is appreciative of the care she received. "I had excellent nurses, Miss Martha, Miss Paula and Miss Crystal. They put their lives on the line to help people. Yes, that's their job but they went above and beyond."

Shealynn noted one of the nurses even gave Lory a hug from her since Shealynn could not do it herself.

Shealynn said, "We give huge thank you to Hot Springs County Memorial Hospital. God used them in a pivotal point. They didn't give up. They persevered with her.

The hospital gave Lory quite a sendoff with many employees waiting outside to cheer Lory on as she exited the hospital for her ride home.

"It warmed my heart and made me cry," Lory said. "I'm so thankful to be at home with my family, to be alive. I think people need to know people do live, not everyone dies."

Shealynn added, "We know people die from this, but she beat the odds from a miracle from God. She's 60 years old and she's high risk times three. It was the power of prayer that saved her life."

Dan August said their church family was praying and they know many other churches were praying for Lory as well.

"We had a lot of people praying," he said.

Shealynn said she was overwhelmed with the love and outpouring of support from the community. "I came from Lousiana. I forgot what a smalltown community feels like."

Lory was released from the hospital on Thursday, April 9. She must self-isolate at home for seven days while they await her latest COVID-19 test. She said she still has a cough from the viral pneumonia she was also diagnosed with.

If it comes back negative she will be released from isolation. A positive test, means an additional 14 days of isolation and another COVID-19 test, she said.

The family is continuing the routine they had before Lory's hospital stay, staying on the other side of the room, not being in the same room for very long.

Once she is released from isolation they plan a celebration, a celebration for her homecoming and of Dan and Lory's 41st anniversary.

"I'd like you to add that I'm thankful for my daughter, Shealynn, thankful that she came here to visit and help take care of me and Dan, especially before this crisis hit, because I don't know what we would do without her," Lory said.

Shealynn added, "I do not need credit, God sees and knows my heart and sees what he's called me to do. It's a humble opportunity I'm grateful for that led me to be able to serve my parents and give back to them what they've done for so many.

Dan August said, "It's a blessing to have my wife home. The outpouring of blessings from this town is exceptional. We put this out there to help make this a positive, compared to all negatives out there."

Lory August added, "God bless everyone in Worland and Thermopolis."