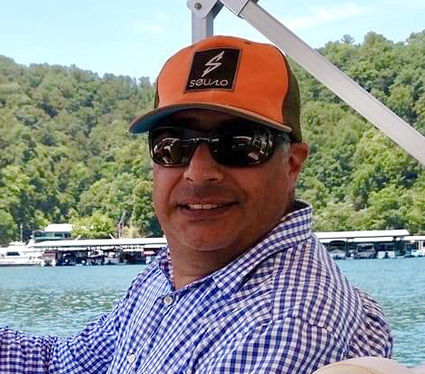 Loren was born in Greeley, Colorado on July 15, 1966, the third of four children, to Larry and Tillie (Torrez) Martinez.

As Loren's younger brother, watching his life was akin to watching a movie – a cross between "Indiana Jones," Wyatt Earp," "8 Seconds," and an episode of "The Andy Griffith Show." Adventure and curiosity were distinctives of his life. As I stood in the shadow to an older brother who could do most things well, I piggy-backed his vivid imagination. I played the supporting role to all of Loren's characters – Evil Knievel, "Nick Barkley" from Big Valley, "Tonto," the Denver Broncos (Floyd Little), and many more. He would engage me with stories of his true heroes, which were always rodeo cowboys, such as Jim Shoulders, Bruce Ford, Casey Tibbs, and Larry Mahan. In the summers of our youth, we'd attend the Greeley Stampede. After entering the gate, Loren would disappear behind the chutes - he loved being in the middle of the action. However, of all the heroes, Loren was captivated by an unending admiration for our grandfather, Frank Torrez.

Despite our parents' disapproval of Loren riding bulls, his adventure followed him into adulthood. On a hot summer night in 1985, I deplaned a twin-engine plane for my first summer in Worland, Wyoming. I stood on the airport curb waiting for my typically prompt brother to pick me up. Speeding around the curve I saw a GMC Jimmy, both windows down, Chris LeDoux blaring on crackling speakers and a dirty straw hat. "You're going to have to shift for me, I broke my collarbone when I got thrown off a bull, but don't tell mom!" Wyoming was the perfect place for Loren to pursue adventure. Although riding bulls was his first love, he also enjoyed rock-climbing, kayaking, and mountain biking – and even just picking his guitar. Loren ventured out of Wyoming several times, but the red dirt of Ten Sleep, Wyoming, always called him back.

Since boyhood, Loren admired the ultimate symbol of the American Cowboy - the cowboy hat. He learned the art of hat building and became a "hatter." He made or had a part in making custom hats for notable musicians, sports figures, and other celebrities. His friend, and fellow hatter, Travis, said of Loren, "Loren enjoyed working on hats for celebrities and musicians, but his favorite was to make hats for, and visit with the working cowboy!"

In gathering accomplishments to highlight, perhaps the most notable attributes emerging, are his meaningful relationships with others, and his impact on so many lives. Loren truly saw the value in each person. He didn't make judgements based on appearance, reputation, social status, race or religion. A natural encourager, he loved seeing the underdog succeed. He was fond of visiting with elderly folks and would be attentive to their stories and life perspectives.

In the last couple of years, Loren turned inward and began to evaluate the highs and lows of his own life. He discovered a life worth living was a life with eternal purpose. The rough edges of his life began to soften, and his love for people was more enriched. Although we stumble and we grieve this unfair loss, hope has been fulfilled. With broken hearts and weak knees, we give back to God what He gave to us. We love you, Loren.

Burial has taken place in Rutherford County, NC. Due to the distancing restrictions of Coronavirus, memorial services will be held at a later date. Online condolences may be made at http://www.bryantfuneralhomeonline.com.