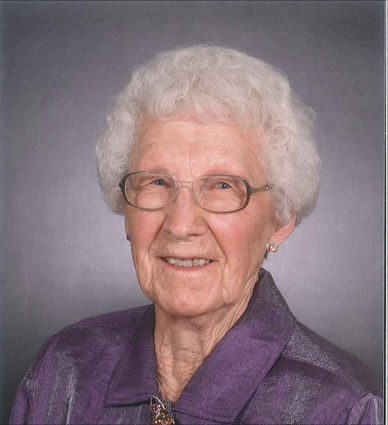 On the beautiful spring morning of April 7, 2020, with much grace and dignity, our mother, Marie Howard, went to meet her Lord and Savior and the awaiting arms of dad.

Marie was born in the Neiber House, near Worland, Wyoming, along with her twin brother, Henry, on April 14, 1917, to Peter and Mary Elizabeth (Ruhl) Scheuerman. The Scheuerman parents were part of the large Germans from Russia immigrants that came to the United States from Yagodnaya Polyana, Saratov in Russia along the Volga River region. They first went to Oshkosh, Wisconsin, then to Fort Collins, Colorado, eventually to Worland, following the building of the sugar beet factory. Marie and Henry were the 10th and 11th children born to the family that eventually numbered 15. Mom is the last sibling of the Scheuerman family and the longest surviving.

Mother's early life was spent on the family farm, surrounded by love and hard work. She learned to cook and bake at a very early age and the family all worked in the beet fields and the garden her mother grew. She loved her family and our social life growing up was with all of our aunts, uncles and cousins. She remained close to her brothers and sisters and with their families, especially her twin Henry.

Marie attended school in Manderson until the eighth grade and then stayed home with the family to help with the baking and hoeing beets. They were a close family and enjoyed dancing, laughter and close-knit bonds all of their lives.

When Mom married dad, they lived in Worland for a short time, behind Wilson's drive-in, eventually buying the Bartholomew farm three miles south of Worland, where she was a true partner in every way. She milked cows, selling fresh cream, growing a garden, raising beautiful flowers, canning every fall along with raising three children, while dad ran the Standard Service Station in Worland. She would make sure he had a special hot lunch on Sunday that she would deliver to him in the days before microwaves. Mom was known for her homemade pies, cookies and especially her sour cream twists. She spent many years making noodles, cabbage burgers and angel food cakes for the bake sales at Zion Lutheran Church where she was a life-long member.

She also managed to teach herself how to cut and barber hair and gave permanent waves to members of the family and friends. She built a lifetime of friendships with welcoming conversation and always a good cup of coffee.

After selling the farm and station, dad and mom moved into Worland and did a lot of fishing and camping. They spent nine years travelling to Yuma, Arizona for the winters. When dad's health declined, he went into the Veteran's Hospital in Sheridan. Shortly thereafter, mom sold everything in Worland, and moved to Sheridan so she could be near him until his death in 1994. She remained in Sheridan for 21 years becoming a special part of her son, Herb's family and making many new friends, keeping up her baking, and continuing to travel back and forth to Worland to see her family. She also managed to squeeze in a cruise, and trips to St. Thomas and Kauai, HI, to visit her son, John. She was part of the Methodist family while in Sheridan.

Mom had excellent health, never taking medications until the last few months. She was always active, never sitting still and kept her mind sharp reading, especially new recipes. She was truly a beautiful and elegant woman.

She moved to Billings in 2012 to be near her daughter and has resided at St. John's, both at Chapel Court and the past 4 years, Garden Court, where her spunky personality kept everyone on their toes. She will be missed.

She was preceded in death by her parents, husband, Harold, son John Howard; her twin Henry Scheuerman and all of her brothers and sisters.

Our mother leaves a legacy of love for her family and set an example of strength, perseverance and inspiration. Cremation has taken place and a celebration of life will be held at a later date at the Riverview Memorial Gardens, Worland, WY.

The family would especially like to thank St. John's Garden Court for their unwavering care and devotion to our mother.

Don't think of me as gone, I am with you still, at each new dawn.