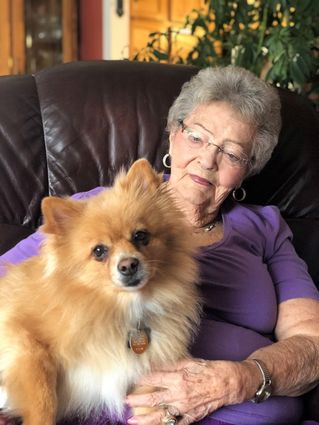 Jackie was born August 13, 1934, in Ten Sleep, WY, and was the daughter of Vivian Bader and Jack Whaley. Jackie was married to Chester Phillips, December 20th, 1952 in Billings MT.

Jackie and Chester worked and moved throughout Wyoming and Montana until finally settling in Jackson Hole, Wyoming in the mid-sixties. Jackson Hole is where Jackie found her heart and soul. Jackie loved socializing, hunting and fishing with Chester, and raising her family in Teton County. Jackie raised three children, Chet Jr., Melody, and Denise in Jackson and shared her love of Wyoming and the outdoors with them.

Jackie's sense of humor and wit have been her most notable qualities and her love of storytelling and game playing was legendary. Her magnetic personality brought many grandchildren, great-grandchildren, extended family and adopted family to her home throughout the years. Jackie loved playing "Heads Up" with her grandchildren and "Apples to Apples" and would stay up late playing during holidays and vacations.

Services will be announced at a later date. Donations can be made in Jackie's name to New Hope Humane Society, 700 15 Mile Rd, Worland, WY 82401. Arrangements have been entrusted to Veile Mortuary.