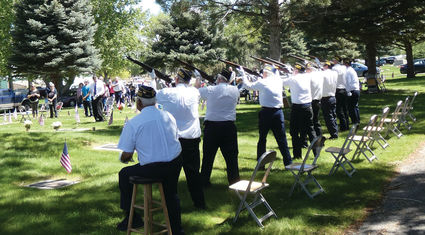 Members of the American Legion Floyd Minch Post 44 fire a three-shot volley to honor the nation's war dead on Memorial Day at Riverview Memorial Gardens in Worland, on Memorial Day, Monday, May 25.

WORLAND – A three-shot volley fired by members of Floyd Minch American Legion Post 44 broke the stillness of the Memorial Day moment, as Worland residents, guest speakers and visiting dignitaries gathered at Riverview Memorial Gardens to remember the many thousands of men and women in every branch of service who have made the ultimate sacrifice to defend the U.S. and its freedoms.

After all assembled made the Pledge of Allegiance on Monday, Stacy Green sang a beautiful rendition of the National Anthem. American Legion Post 44 Chaplain Frank Ley then gave an inspiring invocation. He was followed by Worland Mayor Jim Gill, who welcomed the audience and noted the many reasons why the nation is deeply indebted to the service of American veterans.

Worland Girl Scouts Linze Linbald and Makayla Garay then recited "In Flanders' Fields" and "Reply to Flanders' Fields," two poems written during World War I to honor the thousands of young soldiers whose lives were cruelly snuffed out in northern Europe's beautiful poppy fields.

U.S. Senator John Barrasso (R-Wyoming) was a special guest speaker. Barrasso spoke about the special contributions of Wyoming service members, from the Spanish-American War up to the present day. He spoke of the importance of the younger generation remaining attuned to fact that "freedom isn't free." Quoting from a speech by the late President Ronald Reagan, Barrasso said that "freedom is never more than one generation away from extinction."

After Senator Barrasso's speech, the audience heard from the main speaker, Val Burgess of Sheridan. Burgess has recorded the oral histories of nearly 200 U.S. service men who were prisoners of war during World War II. Burgess spoke of the immense suffering these men experienced, particularly those who were forced by German or Japanese soldiers, near the war's end, to march hundreds of miles in appalling conditions. Burgess also described a 1993 visit by a group of former POWs to the former German prison camp from which they had been liberated 50 years earlier. Burgess began her research after she helped to organize this trip.

Finally, several young ladies from the Worland Girl Scouts laid wreaths to honor America's fallen heroes from all of the country's wars and conflicts.