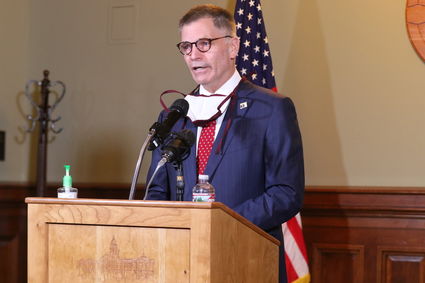 Gov. Mark Gordon speaks during a news conference Wednesday. During the briefing, Gordon expressed frustration over the growing number of coronavirus cases in Wyoming, which he blamed on a "cavalier" and "irresponsible" attitude toward the prevention of COVID-19. Gordon also said that more cuts to state spending will be coming as he tries to balance the state's budget in the face of a $1.5 billion shortfall.

GILLETTE - As some vocal Wyoming residents continue to lose patience with and push back against any and all coronavirus-related public health measures, it's clear Gov. Mark Gordon also is frustrated.

Gordon's frustration comes from that resistance and what he calls a "cavalier" and "irresponsible" attitude toward COVID-19 and preventing its spread.

As an example, during a Wednesday afternoon press briefing, he cited a number of emails he received recently after an older Sweetwater County resident was named as the state's 22nd confirmed virus-related death.

"I got some email I really don't appreciate," the governor said. "When somebody sends me a note that says, 'Well, these people were going to die anyway, they're just dying earlier,' ... I'm sick and tired of that."

Gordon said he has "gotten a number of very strange emails from people that I think if I met them on the street probably wouldn't feel that way."

He said one email went so far as to insinuate those who've died from COVID-19 were lucky because they're now "meeting the Lord."

The governor bristled that some would use that as an excuse to not wear a face mask when prudent or discount the danger of the virus for vulnerable populations like older people.

"Assisting you meeting the Lord isn't part of the deal," he said.

That the spread of the coronavirus has picked up again in Wyoming also is concerning, Gordon said. But in many cases he believes people letting down their guard or just getting tired of following public health recommendations is contributing to the increase.

In Campbell County, the WDH is reporting 74 lab-confirmed cases and 19 probables. Of those combined 93 cases, 70 have recovered and 23 are active.

"Our numbers are ticking up," he said. "What was concerning to me is we started July right around 150-260 (active) cases and that bounced up close to 400.

"It's concerning. It's not dire at this point, but it's very concerning."

Along those lines of being vigilant and responsible, Gordon reiterated his plea for residents to wear face coverings when out in public and social distancing can't be maintained. He also urges people to respect the decisions of private businesses that require customers to wear face masks.

Gordon said he doesn't understand the uproar over large big-box retailers like Menards and Walmart instituting policies that shoppers must wear masks in their stores.

While many of those opposed cite oppression of their rights and the U.S. Constitution, those who do are just plain wrong and off-base, the governor said.

Along with public safety, he said the anger and vitriol aimed at those businesses is contrary to one of the most basic of Republican tenants: private property rights.

While he urges people to respect the decisions of private businesses (even if they disagree), the governor also said he is "not particularly inclined" to order people wear masks in public as other states have done.

"There have been some obnoxious individuals" about wearing masks, he said. "You have to understand what the damn constitution says. Those Republican principles we count on are ones we ought to be respecting."

The governor also said he and the Legislature have a lot of work to do to make deep cuts in the next biennium state budget, which is expected to be at least $750 million and as much as $1.5 billion short.

He's already tasked departments to identify 10% they can cut from their budgets, but that won't be nearly enough to cover an expected 30% drop in revenues, Gordon said.

"Put simple, we don't have enough income," he said. "We lost roughly a third of what we count on to pay our bills for every program in the state. One third is gone."

Coal continues to be "under enormous pressure" and the oil and gas industries also are nearly at a halt with only one rig operating in the state now. Last year at this time there were 33 active rigs working.

He said using the state's rainy day fund is only a Band-Aid approach and would only buy the state one year before making severe cuts.

Besides, Gordon said, it's his job to balance the budget even if it's difficult and means cutting programs and jobs.

"I have to reduce what our expenditures are," he said. "I have to cut the budget to make sure that we have a balanced budget.

"There is no part of government that isn't feeling the pain."

He said that in 1998, the state had a little over 10,000 full-time-equivalent employees. Now that's down to 7,000, a testament to "the kind of lean government Wyoming has done."

Gordon said programs will have to be cut, which means jobs. He also said a program of furloughs will be happen. One he's already announced is state workers making more than $55,000 a year will have to take on unpaid day off a month.

"I don't particularly like it ... but that's our state of affairs," he said.

He also addressed recent criticism he and state officials have taken for Wyoming bidding to buy land and other assets from Occidental Petroleum. While the amount of the bid hasn't been made public, Gordon said the money to buy those assets are part of the state's investment portfolio and is only for use to advance investments for Wyoming.