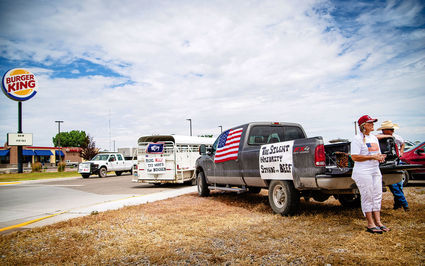 Torrington area ranchers upset by a Burger King ad campaign take part in a peaceful demonstration outside the Torrington Burger King on Friday. Ranchers called the ad, which showed a country star describing beef production as part of the cause of climate change, a "tipping point" in their frustration with the fast food company.

TORRINGTON - A recent ad campaign by fast food giant Burger King proved to be the last straw for a group of Goshen County ranchers.

Burger King released the Impossible Whopper in August 2019, a controversial to some product which features a meat-free patty made mostly of soy instead of beef. The latest ad campaign features BK's plan to introduce lemongrass to cows' diets to reduce methane emissions. In it, teen pop-country singer Mason Ramsey sings about how the new BK diet reduces emissions by more than a third and ends with plain text over a shot of a carnival, stating, "Since we are a part of the problem, we are working on a solution."

That commercial was the tipping point, said Lori Shafer, one of the event's organizers. Local cattle producers decided to take a stand. They did so by lining the streets and adjacent parking lot near Burger King in Torrington on Friday with all manner and makes of pick-up trucks and trailers adorned with pro-beef signs and American flags.

"Our goal is to educate the public. We all know that agriculture is struggling right now," Shafer said. "We need to bring visibility to agriculture in a positive light, the beef industry in particular is taking some really hard hits right now. Our message is meant to be positive to provide that much needed education for the general public to know that agriculture is the mainstay of the economy in Goshen County, and has been for forever."

The ad campaign was a national campaign, and not supported by the local Burger King franchise.

"As franchise owners, we stand with our ranchers and do not support the recent Burger King advertisement," Tim Force, owner, said. "We are proud of our agricultural community."

Goshen County is Wyoming's top beef producer, according to data from the United States Department of Agriculture. In 2018, Goshen County produced 115,000 head, 23,000 more than No. 2 Carbon County.

It's the biggest game in town and it always has been. According to Hugh Hageman, who participated in the demonstration, the beef industry is the local economy's main driver.

"When you get down to the North Platte Valley, you can start wherever, but if you just started at Whalen Dam, where the diversion dam is and diverts into the canals, and then you go from there and you head down the North Platte Valley and it widens out, and you go as far as you want to go in and everything you see on all sides. There's a few beans, a few beets, and other than that, everything you see revolves around the beef industry," he said. "The hay, the corn, all the feed that's grown is, whether you have any beef cattle or not, our entire valley is totally for beef cattle. And we just feel like it's time to start standing up for our industry."

And for longtime producers like Linda Nichol, the fact a company like Burger King – which has made billions from beef products – would release ads that seem to target the very industry that made it is unthinkable.

"It's like a slap in the face," she said. "It angers me because Wyoming ranchers the ultimate conservationists. Ranchers produce more grass, more clean air, more wildlife, more water. They produce a better life. They stop the development of open spaces, which open spaces are disappearing and they're very important."

The ranchers weren't alone, either. They held court in the former Shopko parking lot for around two hours, and the entire time cars and trucks blared their horns in a show of support for the industry.

"It's very encouraging," Morgan Cross-Shoults, one of the demonstrators, said. "It kind of counters what you see when, as a rancher and a producer, you first see the ad. All the honking and the support from us being out here captures those same feelings. It shows that people do support and people are standing with farmers and ranchers."

Greenhouse gas emissions in the United States peaked in the mid-2000s, but have been in decline ever since. The Center for Climate Change and Energy Solutions reported that by 2025, US emissions would be 18% below the peak in 2005. According to the C2ES, agriculture accounts for 9% of the US's emissions, and about a quarter of that is due to methane produced by cattle, according to the Environmental Protection Agency.

The beef industry is shouldering too much of the blame, Hageman said.

"It's been going on a long time, where the beef industry is being blamed for too much carbon footprint, global warming, climate change – whatever you want to call it," he said. "Then, when these bigger corporations start going out and piling on, then when you have this pandemic just crushing the industry, as far as prices go, and you've got all that together and people really want to start standing up for the industry and start going out there. Basically, we're going out there and telling the truth. We really need to get the truth out there about our product, about what we do."

According to Cross, the attack on the beef industry is indicative of a further erosion of values.

"This shows so much of where our country has fallen to," she said. "We see on the news every day that people are tearing down the statues of the people who made our country great, who made our country what it is. And that's the same thing of America. They forgot who got them there, and that was the ranchers of America producing this amazing beef – and now they're trying to sell lab-made beef. We're forgetting the blessings that made us what we are."