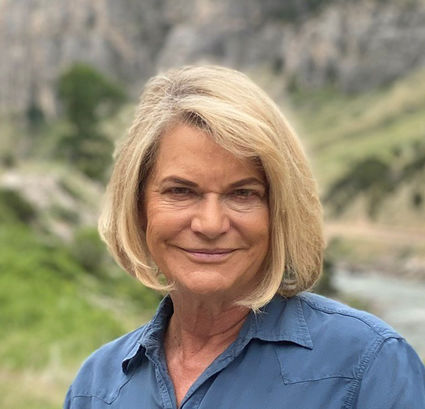 "We wanted to come and meet with them and encourage their efforts," Lummis said. "It's worth coming to meet with teenagers who have an interest in government and the political campaigns that are going on in 2020." She said teenagers who begin working on campaigns now are more apt to vote for the rest of their life, more apt to run for political office and more apt to be involved and become "very aware of the issues."

Lummis said after being sidelined from campaigning in person for about 14 weeks due to COVID-19 restrictions she was ready to meet with people again. While there were Zoom meetings online she said she was "feeling like she was losing track of how people felt about the coronavirus and about the violence and demonstrations going on in the rest of the country. It was really important to me to get out."

There have many changes since Lummis announced her candidacy last summer. "We were talking a lot about immigration policy and health care policy when we started last July. Now we're hearing more about and talking more about bringing back manufacturing from China. That is a direct result of the pandemic, when you see the active ingredients of many of our common pharmaceuticals being manufactured in China and those supply chains disrupted because of coronavirus that has had an impact on how people think about America first. President Trump's whole 'America First' policy is much more supported, more highly regarded than it was a year ago."

Lummis said she when she announced in 2019, unemployment was at historic lows and the economy was strong. "The climb back to normal is on people's minds, so we're talking a lot about the 'Great America Comeback.' It involves bringing manufacturing of technology, pharmaceuticals, of rare earth minerals back from China. It involves even a more robust effort to export our energy because we are so strong right now in producing energy."

In 2016, Lummis opted to retire from the U.S. House. "I came back from Washington in January 2017 without an eye in the rearview mirror," Lummis said. However, when Enzi announced his retirement, she said friends from the House who are now in the Senate contacted her to ask her to consider running.

"I just got re-energized. I had been serving, after I left Congress, on one board in Washington D.C., the Committee for a Responsible Federal Budget. When I was in Congress I was a real deficit hawk. I was trying to cut spending," Lummis said.

Working on the bipartisan committee she has come to realize that the current level of spending is "so unsustainable and so out of control. It has to be addressed, we can't wait. So I was called to service again. I know it was the right decision. This is one of the most fun and interesting campaigns I've ever done."

Fun, she said, because she has been able to reconnect with longtime friends and colleagues and interesting because of how they have had to get creative to campaign with COVID-19 guidelines.

Regarding the protests, demonstrations and rioting, Lummis said, "First, our police, our law enforcement personnel go to work every day not knowing if they are going to come home at night. Their jobs are dangerous. We need to acknowledge and accept that they are on the front lines of public safety. By the same token there are some bad cops and in Minneapolis for example, the union seems to be protecting the bad cops along with the good cops. [Embedded] within these collective bargaining agreements in some big urban centers there are bad cops being protected. It has to be addressed. We can't ignore it, we just have to put it in perspective. We don't throw out public safety in order to ferret out the few bad cops that are there."

She praised the Wyoming Law Enforcement Academy for providing quality training to Wyoming's law enforcement officers, especially in the use of deadly force.

"Wyoming people are concerned and disturbed by what they see going on around the country - violent protests. We all value our constitutional right to peaceably assemble but in too many instances right now the assembly is not peaceful," she said.

Regarding COVID-19, Lummis said that "trusting people's judgment to take their own personal health and the health of the people around them into consideration is the right approach right now. I see people respectfully keeping a distance from each other while still engaging in face-to-face conversation, going to restaurants."

Lummis said she hopes residents of Wyoming will remember a few things about her when they go to the polls Aug. 18 to select the Republican nomination.

•Her eight years in Congress coincided with President Obama's presidency. "I amassed a record of being his No. 1 opponent of all members of Congress of President Obama's agenda. There was never an ill word spoke between President Obama and I, yet no one opposed his agenda more than I. I am a principled conservative."

•While losing Sen. Mike Enzi's 24 years of experience, Lummis will be able to take her eight years of service with her to the Senate, thus will be a "freshman Senator plus eight years." She said this will give her a leg up on committee appointments important to Wyoming.

Lummis has visited with Senate Majority Leader Sen. Mitch McConnell. "He knows I am a devout fiscal conservative and more fiscally conservative than he is." She said he has been informed by her friends in the Senate that she will push him behind closed doors but publicly will support the Republicans.

•Federal policy absolutely matters. "I want to join [Sen.] John Barrasso and go back there and fight for Wyoming. I want to be the person who is fighting tooth and nail for Wyoming's future."

Lummis will be attending the three-day State Republican Convention and Pink Elephant Ball today, Friday and Saturday in Gillette.