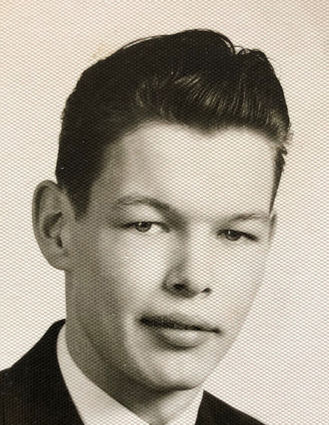 Clare Dale McElhinny, 91, dusted off his old pilot license to fly one more time into the Heavenly sky. Enjoy your flight, Dale, you've earned it!

Dale was born in Edgemont, South Dakota on September 30, 1928 to Clare and Minnie May (Munsinger) McElhinny. While in his youth, the family moved to Lance Creek, Wyoming and later to Greybull. In 1944 Dale went to California to stay with his sister Marge. He worked in the shipyards helping build ships. Dale returned to Wyoming, graduating from Greybull High School in 1946. He married Susalea Baker on June 26, 1946 in Columbus, Montana.

Dale's first job was at a gas station. It was here that he was offered a job as a pumper with Ohio Oil. He later was made the gang pusher for Hidden Dome Oil Field when Marathon Oil bought out Ohio Oil. The couple moved to Grass Creek and finally to Hidden Dome where they stayed from 1948 through 1960. In 1960 the family moved to Worland.

Dale worked hard to receive his pilot's license and was able to buy two airplanes, a Aeronca Chief and an Ercoupe. He worked with the airplane staff while at Hidden Dome. Together they built an airplane hanger and a runway. He was so happy he was able to reach his dream of flying. He enjoyed reading about World War I and II airplanes. In retirement he spent many hours rebuilding the Aeronca Chief after the hanger blew down from the fierce Wyoming winds. He was a jack-of-all-trades kind of man. He would attempt to fix or build almost anything. He had a picture framing business that he ran out of his garage for many years. On Dale's 80th birthday, most of his family and friends came to celebrate at Sander's Park. His health started failing after breaking his neck, but even two surgeries later he was able to care for himself until the very end.

Dale was an avid hunter and camper. He learned to hunt from his father. They would go on pack trips to Jackson Hole every fall. Summer's were filled with family time, camping in the Big Horns or boating and water-skiing on Boysen Reservoir. He taught his children by example. Once, when the children were young, they were helping him put together a swing set. He took a break and the children disassembled all their hard work. Dale wasn't in a big hurry to put it together again. During one of the family trips to Davis City, Iowa, Dale narrowly missed a head-on collision with a semi. His quick reflexes saved his family and they all enjoyed the ride home in a "fancy" new car. He had a great sense of humor which helped him all through his life. He also had a great love for horses. He would get a curry comb and brush and brush and curry the horses for hours. The horses would line up awaiting their turn for this special treatment.

He was preceded in death by his parents, sisters, Marge Miller, Marion Pavlus and Jodi Appleton Nash; three great-grandchildren.

Due to the Covid-19 outbreak no formal services will be held at this time. Cremation has taken place and as per his wishes, he will be laid to rest in the family plot in Glenrock, WY. Online condolences may be made at http://www.bryantfuneralhomeonline.com.