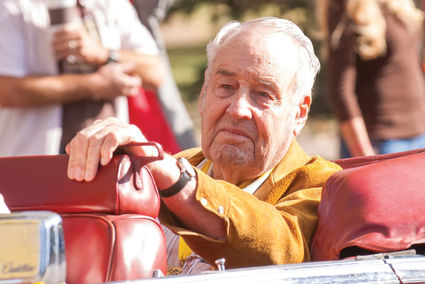 George Frison takes part in UW's Homecoming Parade in 2010. Frison died Sunday at the age of 95.

LARAMIE - George Frison, a Worland native and University of Wyoming graduate who achieved international acclaim as an archaeologist during a lengthy career as a UW faculty member, died Sunday, Sept. 6, in Laramie. He was 95.

Frison, who founded UW's Department of Anthropology and was the first state archaeologist, is the only UW faculty member ever elected to the National Academy of Sciences.

"George was a huge figure in archaeology, most known for his pioneering Paleoindian archaeology in Wyoming as well as for his research into human hunting, shaped by growing up hunting in Wyoming," Interim Provost Anne Alexander says. "Well into his 90s, George came into his lab every day up until last spring -- and, then, only deterred because of the pandemic. His legacy is profound, and he put Wyoming on the map for archaeology. He is a legitimate legend."

Frison was born Nov. 11, 1924, in Worland and grew up on his grandparents' ranch near Ten Sleep, spending his early years working sheep and cattle. He spent his spare time collecting arrowheads, exploring caves in the Big Horn Mountains and developing a love for the history and prehistory of Wyoming.

He enrolled in UW in 1942, but his education was cut short when he enlisted in the U.S. Navy, serving in the amphibious forces of the South Pacific during World War II. After being honorably discharged in 1946, he returned to the family ranch.

While operating the ranch, Frison joined the Wyoming Archaeological Society and was an avocational archaeologist, discovering numerous artifacts including atlatl and dart fragments. His interactions with UW Professor William Mulloy prompted Frison to enroll at UW in 1962 at the age of 37 to finish his undergraduate work.

After earning his master's and doctoral degrees at the University of Michigan, Frison returned to UW in 1967 to head the new Department of Anthropology and serve as the first state archaeologist, a position he held until 1984.

During his decades of work at UW, Frison made major contributions to our understanding of the prehistory of the northwestern Great Plains in the areas of chipped stone technology, bison bone beds, Paleoindian systematics and Plains chronology. His many books and papers, which include "Prehistoric Hunters of the High Plains," made him an internationally recognized figure in archaeology.

"Our department would be a shadow of its current self if not for his efforts. He easily ranks among the greatest field archaeologists in the history of American archaeology, having excavated several major sites in Wyoming, Colorado and Montana," says Professor Todd Surovell, head of UW's Department of Anthropology. "Dr. Frison's contributions to the field of archaeology, the Department of Anthropology, the University of Wyoming and the state of Wyoming cannot be overstated. George was a giant while maintaining a persona that was quiet, humble and approachable."

Among his legacies is the George C. Frison Institute of Archaeology and Anthropology at UW, which funds archaeological research in the Rock Mountains.