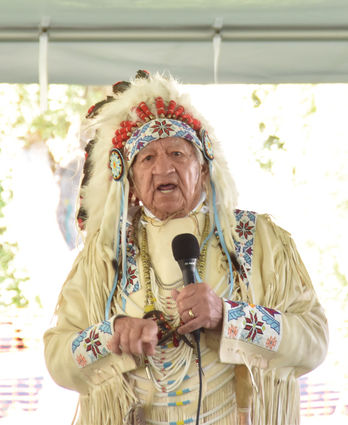 Eastern Shoshone tribal member Willie LeClair gave the keynote address to the 2020 Indigenous People's Day event at the Washakie Museum & Cultural Center on Saturday, Oct. 3, 2020. Here, he discusses how the white man misinterpreted the Indians sign language for weaver as snake instead.

LeClair discussed the history of the tribe and the Indian culture. When asked toward the end of his presentation if he preferred Indian or Native American or another word to describe his ethnicity, he replied, "I was born an Indian and I will die an Indian," all the others, he said is political correctness for the benefit of others.

He said prior to the "white man" coming to North America the Indian population was about 6 million, by the 1890s it had dwindled to less 250,000.

The population decline came about for several reasons, one was small pox and the other having the Indians placed on reservations. "Taken us out of our complete environment that we were used to and that we were able to live by," LeClair said. "When I say live by, I mean we did not take anything we could not use, we did not waste."

The buffalo, he said, provided everything they needed back in the early days – food, clothing, lodging.

When asked by a young man from the audience how long it took to make a tepee, he said as long as it took for the women to prepare 18 to 26 buffalo hides and sew them together, likely several months.

The Eastern Shoshone tribe, he said at one time was given 44.6 million acres in a treaty signed by Chief Washakie. He noted that Chief Washakie did not bring all tribal members that he could have to the treaty because of concern that they would be killed by the military.

Five winters later in 1868 another treaty cut the acres to 2.5 million acres.

LeClair said communication was difficult with the white man because of the language barrier.

He said they attempted to communicate through sign language, however, often their signs were misinterpreted. He said when asked what kind of people they were they signed that they were weavers; however, the white man took the sign for weavers ad a sign for snakes, thus there are many references to snakes in Wyoming and Idaho, LeClair said.

In answering a question from the audience, LeClair said tribes are working on translating their language into English. He said the Northern Arapahoe has a "pretty good handle" on this, but the Eastern Shoshone tribe is further behind, in part because they have different languages for the men and women.

In answering another question he said the different tribes each have their own language and the Sioux have seven separate dialects among their tribe.

He discussed the different head dresses he brought with him, noting it took him 15 years to make one with the white with black tip eagle feathers.

LeClair also briefly mentioned the worst massacre in Indian history – the Bear River Massacre in Idaho. He said it was prior to Sand Creek and Wounded Knee. "It was the first, the worst and the forgotten." He said it happened about the same time of year, in the middle of winter when the Indian people were most vulnerable.

According to the website, http://www.utahhumanities.org, "In the early morning cold of January 29, 1863, between 270 and 400 Shoshone men, women, and children were killed by the U.S. Army near present-day Preston, Idaho. This was the largest number of victims in any Indian massacre west of the Mississippi, but because it happened during the Civil War, the event got little attention."

According to Smithsonianmag.com, "Historians call the Bear River Massacre of 1863 the deadliest reported attack on Native Americans by the U.S. military-worse than Sand Creek in 1864, the Marias in 1870 and Wounded Knee in 1890."

According to the National Park Service, the Sand Creek Massacre occurred on Nov. 29, 1864, when 675 U.S. volunteer soldiers attacked a village of about 750 Cheyenne and Arapaho Indians in the Colorado territory. The troops killed about 230 Indians, mostly women, children and the elderly.

Marias occurred on Jan. 23, 1870 in Montana. According to history.com, the soldiers murdered 27 men, 90 women and 50 children, attacking while they were sleeping.

Wounded Knee occurred on Dec. 29, 1890, where 146 Sioux were killed on the Pine Ridge reservation in South Dakota.

LeClair main point of emphasis, however, was the Circle of Respect. At the top of the circle (at 12 o'clock) is respect. "Respect is probably one of the most important tools or words that we can utilitize in any culture, any language, because we only got one race, the human race. Grandfather, or the Creator, gave us this way."

He said they were taught respect but he noted respect is not given, but rather must be earned. People need to respect their parents, their spirituality, Mother Earth ..."

At 3 o'clock on the Circle of Respect is self-respect. "We can't give something we don't own," he said.

At 6 o'clock is a person's self-image. "Who am I? I say I have a good self-image because I am proud of who I am. Now I have something I can give you, I can give you respect." 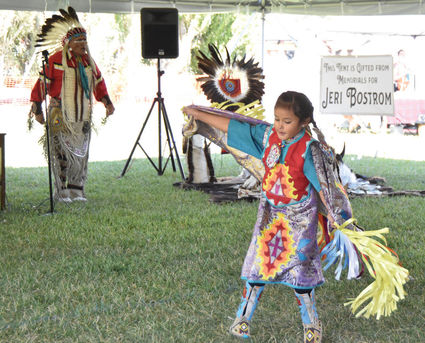 The Wind River Dancers, members of the Eastern Shoshone and Northern Arapaho tribes perform at the Washakie Museum & Cultural Center Indigenous People's Day event on Saturday, Oct. 3. The group performed together and they had dances for the younger members men and women as well as for all the women and all the men and a few solo dancers performed. There was discussion regarding the dancers regalia or outfits. The audience was informed by the emcee that the outfits are "not costumes as costumes are what we will wear in a few weeks (Halloween)."

To complete the circle at 9 o'clock a person must be completely satisfied. And when the circle is complete, he said only positive things must be placed in the circle.

He said all things need to be respected, citing the grass where the presentation was taken place on the back lawn of the museum. When a baby started crying, he said we must respect the baby "because that's the future of us. Don't get disturbed because that little one is expressing itself, but be blessed that we got that little one. That's our future," he said.

"This would be a lot better world if everybody showed a lot of respect, no animosities, no hatred, no anger," LeClair said.

He said many years ago the white man tried to take the Indian off the reservation, they sent the children to boarding school, cut their hair and punished them if they spoke in their native language. They tried to take away their identity and their culture, he said.