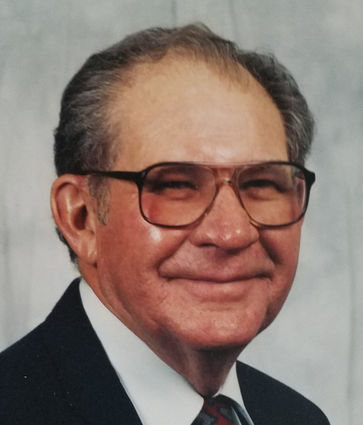 Bruce E. Stratmann passed from this world to his heavenly home on October 11, 2020 following a brief illness. Bruce was born to Ernest and Meta (Stoltenberg) Stratmann on November 2, 1929 in Holyrood, Kansas. He was the only son to this family; his father passed when he was only 7 and he was left to be man of the house for his mother and two sisters. Bruce was resourceful and a fix-it man but was definitely "cared" for by the three women in his life.

In his youth he farmed for his uncle and worked for his brother-in-law at his gas station and was most happy to visit about his prized possession his "Indian" motorcycle. During his stint at the gas station he was present during an explosion, surely angels watched over him as he was only burned in the accident.

In 1951 Bruce joined the Army and was stationed in Alaska, he served until 1953 and was proud to be a veteran in service to his country.

In the summer of 1953 after his discharge, Bruce met the love of his life Dorothy Kohls at a dance. The problem being she was accompanied by someone else, "a jerk", in his estimation. Long story short, he took her home that night and they were married one year later on July 3, 1954 in Ellsworth, Kansas. Dorothy continued to "care for" or spoil him until the day she passed in May of 2019. He missed her terribly this last 17 months.

Bruce and Dorothy lived in Lyons where he worked for Pacific Pumps and they started their family. In 1960 they packed up their 3 young children and all of their belongings for the company transfer to Thermopolis, WY. He worked through the ups and downs of the oil field and the changes in the company for 38 years. He was promoted many times along the way and was very talented at his job and always a loyal company man.

In 1974 there was an addition to the family. As Dorothy continued her nursing career and the nest began to empty there was a young Indian girl that got into her heart. Audrey was soon to be in Bruce's heart as well and she was the next blessing to the family. Audrey began to stay with "Mom and Dad" during the week. As her health problems persisted she was placed in another foster home where she did not thrive. She returned to "Mom and Dad" and has been a part of the family since and thrived with the love that was given to her. Audrey blesses our family beyond any measure with profound faith and wisdom from above.

Bruce retired in 1989 to become Grandpa in charge. He loved woodworking, building things, keeping a perfect yard and managing grandkids. He helped with numerous family and church fix-it projects until he passed. He was the ultimate do-it-yourselfer.