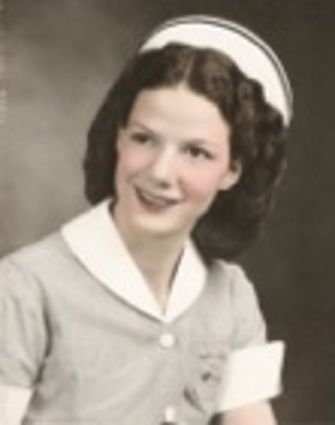 She was a hard-working, resilient and generous person who lived by the principles of her Christian faith. She cherished her family, took pride in her home, and used her dry wit to bring laughter into any conversation. In a career lasting 60 years, she worked as a nurse in hospitals, clinics and nursing homes in Kansas and Wyoming.

Bernice was born to Roy and Mary Bell (Huff) Toothaker on a farm 12 miles south of Protection, Kan. She was the 11th of 13 children. Throughout her life, she pronounced her name as "BUR-nus."

Growing up in the Depression and Dust Bowl years, Bernice and her sister May had the twice-daily job of milking 20 cows, separating the cream and washing the separator. She went barefoot in the summer, wore hand-made dresses to school, and walked home four miles in all kinds of weather. In 1944, her parents bought a farm near Wilmore; Bernice and her younger sister and brother finished high school there.

After working in a doctor's office in high school, Bernice trained as a nurse at Wesley Hospital in Wichita, along with her sister Fay. Bernice and her roommate, Warene Wooley, became close friends, and all three later attended Kansas State University together.

In 1949, she married Forrest Smith of Wilmore. They started their family in Lyons, later moving to Great Bend and McPherson, Kan. As teenagers, all four of her children worked with their mother in nursing care, seeing first hand her dedication and skill in caring for others.

The family moved to Worland, Wyo., in 1963, where Bernice worked at Washakie Hospital. She also played softball, joined the Toastmaster's Club, and served as a Cub Scouts den mother. In 1972, they returned to Kansas, living in Hutchinson, Sterling and Plains.

In Plains, Bernice and Forrest divorced. With her youngest son Scott still in high school, Bernice worked in Ashland during the week so he could graduate with his class in Plains.

In 1986, she moved back to Hutchinson, where she purchased a home, worked at Hutchinson Hospital and spent all the time possible with her children and grandchildren. She capped her career as director of nursing for Mennonite Manor in South Hutchinson, and retired in 2007.

Bernice loved to travel. She took annual trips with her sisters-in-law Virginia Linnell and Lorita Harrison, traveled in Europe with her sons, toured the Colorado Rockies, and organized trips for her children and grandchildren to Port Clyde, Maine. She hosted many summer and holiday gatherings for her family, showing her love and generosity with gifts and special recipes.

She enjoyed collecting, especially Beanie Babies. At 88, she wrote her life story in a series of heartfelt and funny anecdotes.

In 2018, Bernice moved to Waldron Place in Hutchinson, where she thrived in the care of Waldron's staff and enjoyed the company of her many visitors.

A small graveside service and burial were held at the Wilmore Cemetery in Wilmore, Kan., on Dec. 5, 2020. Bernice was laid to rest next to her parents. A more inclusive celebration of her life is planned for a later date.