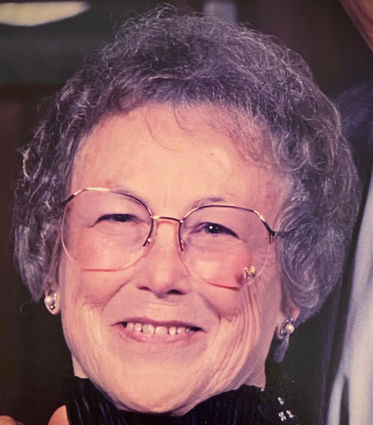 On December 18, 2020 Daisy Elizabeth Crawford was given the greatest Christmas gift of all, being welcomed home by her Lord and Savior. She is singing Hallelujah and praising God along with her husband.

Daisy was born in Monticello, Illinois on May 5, 1930. Soon after her family moved to Baskin, Louisiana where she grew up and became a feisty southern lady. At 17 Daisy met her husband, Sid Crawford while working at a small hospital. Two years later they moved to Oklahoma ultimately residing in Worland where Daisy worked at Stockgrowers State Bank. The highlight of her career was surviving the infamous 1976 bank robbery and being held hostage in the vault for 2 hours with 14 fellow employees. Not wanting her jewelry stolen she stuffed them in her bra.

After retirement Daisy and Sid decided to return to Louisiana where they lived by the Tensas River for several years enjoying family and friends. They later returned to Worland and lived on the Banjo where she enjoyed the many beautiful sunsets and had a green thumb for growing a beautiful garden of flowers, especially roses.

Daisy was preceded in death by her husband Sid, her parents, six brothers and son-in-law Dale Wagner. Those left behind and cherishing her memory include her children Skip (Linda) Crawford and Angela Wagner; brother, Ted Seffens; grandchildren Jeremy (Kris) Wagner, Kodi (Jake) Hardman, Carmen (Nathan) Phillips, Seth (Lisa) Crawford and Lindsey (Chad) Beadell. She has thirteen great-grandchildren and loved spending time with them.

Daisy's legacy to her family was her strong belief and love of Jesus Christ. She was definitely a prayer warrior for her family and will be greatly missed. The last three years of her life were spent at the Worland Healthcare Center where she received excellent love and care. She often mentioned how grateful she was for all the staff.

There will be no public funeral held. A private family graveside service has taken place at Riverview Memorial Gardens with Dr. Roger Dobson officiating. In lieu of flowers, donations may be made to the Zion Zest Kitchen fund. Please mail donations directly to Zion Evangelical Lutheran Church, P.O. Box 376, Worland, WY 82401. Funeral arrangements have been entrusted to Veile Mortuary.