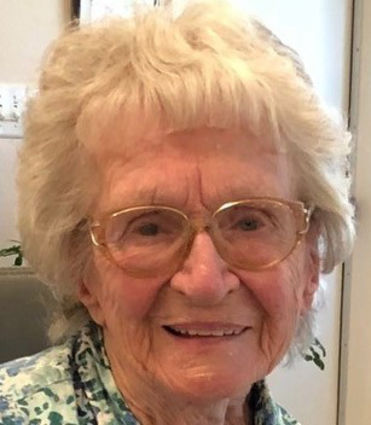 The family farmed near Worland. She attended Durkee and Worland schools graduating from Worland High School in 1946. Music was a big part of her family life because of her mother, Esther. Donna was an accomplished pianist. She loved to dance and read. She was a twirler in the band. Donna attended business school in Denver where she studied bookkeeping and stayed with a host family.

After returning to Worland, she married Harold (Harry) B. Swing February 15, 1947. She said he thought he could do anything, and "I thought I could too." They made their home in Worland. They started building a home, living in the basement for a time, before constructing the upper floor some years later as their family grew. They implemented Swing Motors, where Donna did the office work and bookkeeping. Together they had 4 children: Jean, Peggy, Terry, and Elmer. The couple later divorced, leaving Donna to be a single mom at a young age. She was able to keep her family in the center of her life while juggling other responsibilities.

Donna's disability at age 27 changed her life, but she beat all the odds and lived another 65 years! Sheer determination and strong will drove her; she said she was glad to be alive and she wanted to be able to raise her children. Donna always looked at the bright side of things, what she could still do and how she could help someone else.

Donna was never too busy to serve, whether it was at school for her children, donating her time at the RER Skating Rink or helping the VFW Auxiliary. She was recognized for her 31 years of service as a "Gray Lady" to the American Red Cross by receiving the Clara Barton Award. She was a lifelong member of the United Methodist Church where she was actively involved teaching and coordinating Sunday School. She was a member of the Worland Garden Club and was known for her many and beautiful African Violets. She taught piano for many years, and her students were always treated with a small snack while they awaited their turn with their beloved teacher.

She spent a lot of very enjoyable time at the Worland Senior Center for lunches and socializing with friends and staff alike. She would drive her motorized scooter to her favorite activities, Pinochle and Bingo being a highlight each week.

She was preceded in death by her parents, one brother, Ralph Pickett and his wife, Jean.

A family funeral service was held Wednesday, December 30, 2020 at the United Methodist Church with Pastor Kayilu Pfoze officiating. Burial followed at Riverview Memorial Gardens Cemetery. Memorial donations may be made to the Worland Senior Center and sent to PO Box 524, Worland, WY 82401. Online condolences may be made at http://www.bryantfuneralhomeonline.com.