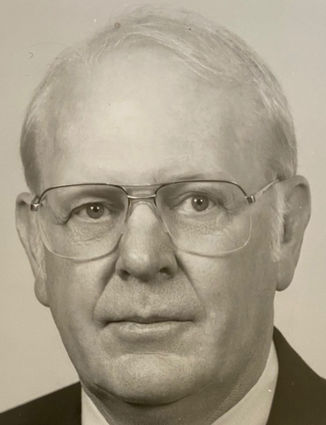 John A. Worrall died on December 25, 2020 at Washakie Medical Center from complications of COVID-19. John was born in Ft. Collins, Colorado on January 7 1926 to Tresa Strelow Worrall and A.I. "Ike" Worrall. His parents moved to Cody, Wyoming with John and his sister, Athlyn "Addie" when he was two. He grew up in Cody where Tresa ran the first hospital for many years. John was able to hunt and fish while he grew up and played sports for Cody High School until he graduated in 1944. He made many lifelong friends while in high school, his best friend Jack Winninger foremost among them.

Upon graduation from high school John, like many others, immediately joined the armed service. He was in the 3 rd Division of the U.S. Army. He served as an infantryman and fought in France and Germany. He was decorated twice for bravery receiving the Bronze Star with an Oak Leaf cluster. He was most proud of his Combat

Infantryman's Badge, signifying having actually been in combat. Upon his Honorable Discharge from the Army in 1946, he went to the University of Wyoming and received a degree in Agriculture in 1950. He moved to Huntley, Wyoming and taught at Huntley High School. He then moved to Torrington and went to work as a fieldman for Holly Sugar.

It was in Torrington where he met Mary Pearson who he fell in love with and married on January 12, 1952. In October of 1952, John P. Worrall, their only child was born. In 1953, he and Mary moved to Basin, Wyoming where John was a UW Extension agent for a year. Sugar was apparently in his blood because he and Mary returned to Torrington and John rejoined Holly Sugar just in time for a brief transfer to Garden City, Kansas. In 1955, they returned to Torrington and John continued working as a fieldman until 1962 when he was promoted to Agricultural Manager in Hardin, Montana. They moved again in 1963 to Worland, Wyoming where John held the same position. In 1965. John and family moved to Torrington for the last time where John was the Ag Manager until he was promoted to Western Regional Manager for Holly Sugar in Tracy, California. In 1970, John was again promoted to Assistant Vice President for Agriculture and the family moved to Colorado Springs, Colorado. In 1979, John and Mary moved to Sheridan, Wyoming where he was the head of Holly's Beet Seed Division. John was also President of West Coast Beet Seed Company for two years before his retirement from Holly after 43 ½ years in 1991.

After his retirement, John pursued his favorite hobbies of bird hunting and fly fishing. He became a fixture on the Big Horn River at Ft. Smith, Montana in his boat, Lucky II. John and Mary moved to Worland in 2005 and they shared their lives together until Mary passed away in 2017. After her passing, John was still active, driving his car until 2020. He entered the nursing home, Worland Healthcare and Rehabilitation in July 2020 and was blessed that he had the same room as Mary until her passing.

John was predeceased by his wife Mary, mother Tresa and his father Ike, his sister Athlyn Husemann and her husband Ed as well as his best friend Jack Winninger.

He is survived by his son John and his wife Tracy of Worland, his granddaughter Lindsey Garcia, her husband David and their sons Javier and Andreas, his grandson Eli and his fiancé Danielle Klemenko both of Missoula, Montana, many nieces and nephews, as well as his hunting and fishing friends from over the years.

John spent his last years "going on his rounds" by visiting his financial analyst, John Shaw and his excellent staff, his banker Gil McEndree and the great folks at Pinnacle, the gang at Ranchito and, last but not least, Maggie Johnson and her staff at Maggie's where he was a breakfast regular. He was a great advocate for his wife Mary during the many years she spent in long term care in Basin and in Worland. He fished and hunted well into his 90s which is something we could all hope for at his age.

During his last days at the Hospital and before he lost consciousness, he was able to speak his last words. While not totally clear, as he had on an oxygen mask, most everyone was sure he said, "Just one more cast."

Services for John will be scheduled for a later date when family and friends can safely gather. Memorial contributions may be made directly to the Worland Senior Center. Cremation has taken place at the Antelope Butte Crematory. Funeral and cremation arrangements have been entrusted to Veile Mortuary.