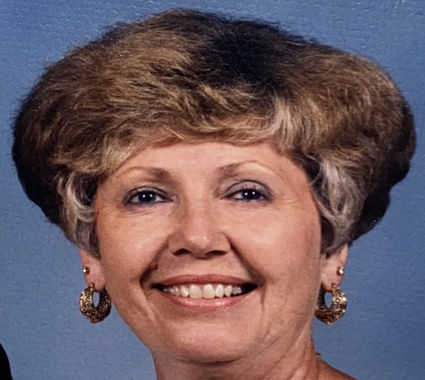 Mary Evelyn Bower passed away in Worland on December 23, 2020 with her son Brian at her side. Mary Evelyn was born in Spokane, WA on May 6, 1936 to Thomas and Lois Elaine (Coulter) Turnbull. Her family later lived in Amarillo, TX before moving to Worland when she was about 7 years old where her father became a partner with her grandfather, Frank Coulter, in the Farmers Lumber Company.

On April 20, 1958 Mary Evelyn married George Q. Bower at the United Methodist Church in Worland. Soon after the couple built their first home in Worland where they had three sons, Brian (1959), Stuart (1962), and Earl (1964). During this time Mary Evelyn worked as a radio announcer at KWOR and she was a private vocal music instructor for many high school students. Later she worked with her husband in his Real Estate and Insurance Agency until they both retired.

Mary Evelyn was active in many organizations including the Bell Choir, the Psalm Choir, Eastern Star, Gorgeous Gals, Women's Golf, Cub Scout Den leader, Washakie Museum performances, and the United Methodist Church choir, which she directed for more than a decade, as well as many others. Mary Evelyn enjoyed acting including musicals and was involved in the Worland Community Players productions of Oklahoma, Molly Brown, and The Corns Up. In the Broadway hit play called South Pacific, she played the lead role of Nellie Forbush across from her brother-in-law Ole Natwick.

Mary Evelyn and George were active in Republican politics at the local and state levels. Mary Evelyn also helped to organize the Republican Women's House Walks and they both attended the Lincoln Day dinners and other events.

In 1976 the family built a cabin located in the Canyon Creek Country development within the Big Horn Mountains and this became one of her favorite places. Mary Evelyn enjoyed backpacking, downhill skiing, trail bike riding, ATVs, snowmobiling, water skiing, sailing, sight-seeing, and many other activities with her family.

Mary Evelyn and George travelled to many countries during their retirement years. At one point they purchased a 40-foot sailboat in Florida that they named the MEB 2 and spent a year living aboard sailing it to the Bahamas and through the Intracoastal Waterway.

She and George took them on trips that included Mount Rushmore, Yellowstone National Park, and DisneyLand in California.

Mary Evelyn is survived by her husband of 62 years George (92), sons Brian, Stuart, and Earl (Angela) all living in Worland. Mary Evelyn's 7 grandchildren and 8 great grandchildren were always a source of pride and joy for her.

Cremation has taken place at the Antelope Butte Crematory. A Celebration of Life service is planned at the United Methodist Church in Worland on June 12 th , 2021 at 11am with Pastor Kayilu Pfoze officiating. Memorial donations may be made to the Washakie Museum and Cultural Center in Worland. Arrangements have been entrusted to Veile Mortuary.