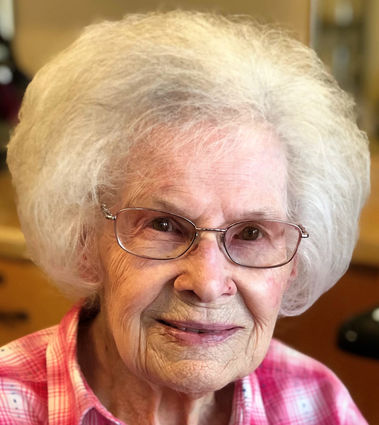 Mary Lois Pearce passed away on January 8, 2021 at the Bella Terra Facility in Billings, MT from natural causes. She was a feisty 99 ½ years old.

Mary was born May 13, 1921 on the family farm to David and Edna Horn, in Caddo, OK. She was taught at a very young age how to work hard and how to earn and save money, along with her seven brothers and sisters. She was helping with the chores almost by the time she could walk. There were cows to milk, chickens to feed, eggs to gather, horses to tend and barns to clean. When she was eight she was picking cotton, which was very painful she said, and digging potatoes for other farmers to help earn money.

On January 22, 1938 she married R.C. Pearce in Broken Bow, OK. He was the most handsome man she had ever seen. They started a family. In 1944 they moved to Worland, WY and built a home where they raised their three children, Joyce, Carolyn and Chester. Years later Mary and R.C. moved to Hyattville, built another home, started ranching with their son Chester and his family and raised top quality Black Angus bulls, alfalfa and also drilled oil wells.

Over the years Mary had become tough and feisty, with a bit of an ornery streak in her, which was one way of her showing you that she liked you. These assets would prove to be of great value to her in the years to follow. It was in Hyattville where Mary met Shirley Reynolds and they became the best of friends. They had a mutual love for art, painting, music, flowers, an occasional refreshing drink and dreams of traveling. Mary was a member of the Baptist Church and Eastern Stars. Out of necessity Mary became a self-taught, top quality seamstress. She sewed the majority of her clothes and made many dresses for her granddaughters. She was ahead of her time in fashion and had a keen eye for décor. She also made the best pies and sweet iced tea and kept a spotless house.

After the sudden death of her beloved husband R.C., at the young age of 50, Mary sold the ranch and moved back to Worland for a short time and then moved to Casper, WY where she worked for Cassis Clothing Store for a few years and became one of the top sales ladies. She retired and decided it was time to travel so she grabbed her best friend Shirley and they took a 30 day cruise through Europe. Her travels took her from the east coast to the west coast, visiting family and enjoying the sights.

In 2006 Mary moved to Billings, MT to be near her granddaughter Kelly who became her loving and patient caregiver and strongest advocate. She lived in assisted leaving for many years until she had hip surgery in June, 2020 and then fell and broke her ribs. She was then moved to Bella Terra rehabilitation center. Mary would light up when visitors came and was saddened when they would have to leave. She would stand and wave at the window or in the hallway until you were out of sight. So much history, so many memories. It was Kelly who was with her in the end. Holding her hand, giving hugs and kisses, giving her comfort. The staff of Bella Terra treated her like family which we are all very grateful for. She had a long and fruitful life.

Mary was preceded in death by her husband R.C., her parents David and Edna Horn, six of her siblings, Garland, Glades, Esther, Eunice, David Jr., Peaches, and her grandson Mark Christy.

Mary had a good heart and an easy laugh and smile that brought joy to all who really knew her.

A private family graveside service will be held, Friday, January 15, 2021 at 10:00am in Worland, WY. Mary will be buried next to her husband R.C. Pearce.

In lieu of flowers please send to your favorite charity or plant a tree in honor of a loved one. Arrangements have been entrusted to Veile Mortuary.