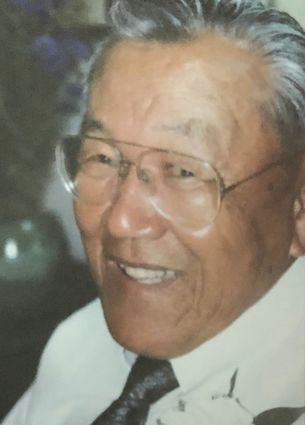 George Ujifusa, 97-year-old lifelong resident of Worland, passed away on January 5, 2021 at the Worland Healthcare and Rehabilitation Center.

George was born on December 26, 1923 in Worland, the third of seven children born to Manpei 'Mike' and Toyono (Inui) Ujifusa. He grew up on the family farm, only leaving long enough to receive his education. He was a member of the Class of 1941. Following graduation, he dedicated himself to the farm, he and his brother Warren were nearly inseparable throughout their lives. George had his own house on the farm and kept the lawn between them very well groomed. Springtime would find him out in the fields, kicking the dirt clods to determine if it was time to start getting the fields ready to plant. This time of year also meant an abundant supply of asparagus. George would often be seen on his 4-wheeler, wandering on his own route to gather the vegetable for the family and a few lucky friends.

George was well-known for his cheerful attitude and was quick to greet you with a laugh and a smile. He was always willing to help his family, whether financially or good ol' moral support, Uncle George wouldn't let you down. Although he never married or had children of his own, his nieces and nephews were extremely important to him. When the "city cousins" came to visit, Uncle George made sure that they had ample time to explore the farm on foot, on a 4-wheeler and sometimes behind the wheel of a tractor or truck. Many were given the chance to learn how to drive under his tutelage. Fireworks were almost always a highlight of these special visits.

He learned the family stories from his parents and became the family historian. He loved to share about how the family had come to the United States and here to Wyoming. After his "retirement", he and a group of friends would go golfing every day. When he was younger, he was on a bowling league and in the winter months he enjoyed "pot bowling" where they would come in the afternoon and just put a "little wager" on each game.

He moved to the Worland Healthcare and Rehabilitation Center in January of 2018. Keeping the closeness that he and Warren had, Warren joined him in June of 2020. The family is so very grateful for the wonderful care they both received while in this facility.

Cremation has taken place and a private family ceremony will be held at a later date. Online condolences may be made at http://www.bryantfuneralhomeonline.com.