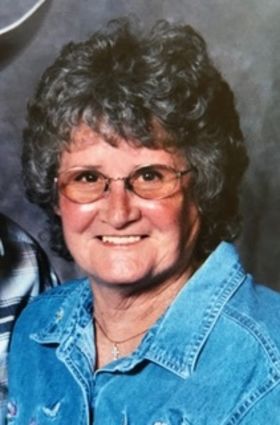 Maude Colleen Rhodes, 79, of Thermopolis, WY passed away on January 9, 2021 in Scottsdale, AZ.

Colleen was born December 3, 1941 to Clifford and Edna (Ready) Dockery. She was the 4th of 5 children and grew up on Owl Creek, near Thermopolis.

She attended Hot Springs County schools and met future husband Frank J. Rhodes in high school. Colleen and Frank were married August 30, 1959 and moved to Frank's family ranch on Cottonwood near Hamilton Dome. Colleen enjoyed the ranch life at the Putney Place for several years. They also traveled to many rodeos, Frank roping and Colleen running barrels. They moved down the creek to the Haynes Place and adopted 2 children, son BJ and daughter Lori. Colleen loved being a mom, and was the best. All of her life revolved around her family and her friends, as Colleen was such a caring and social person with a great sense of humor. She loved working at ropings and rodeos, and helping with county fairs. She also enjoyed flowers, books, birds and crafts. She had a great career driving a school bus for the county and loved all 40 years of hauling kids around and getting to know them.

Frank and Colleen had most recently spent the winters in Arizona rekindling friendships around team ropings and enjoying that life again.

Colleen was preceded in death by her parents, brother Bob Dockery, and baby sister Barbara June.

A friends and family reception will be held in Thermopolis early this summer followed by an interment at the Meeteetse Cemetery.