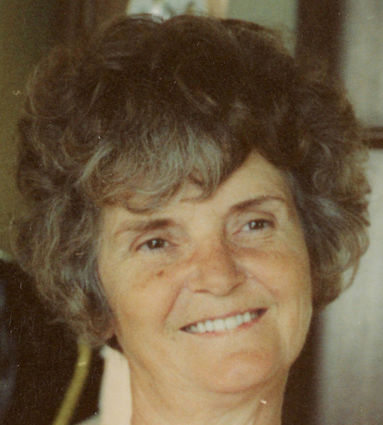 Long time Worland resident, Mert Swing, passed away of natural causes Wednesday, February 10, 2021 in Worland, Wyoming. She was 93. Mert lived the last 7 years under the watchful care of grandson Nathan, Bobbi and Taylor while being wildly entertained by Addi. Her remaining two months were spent in her daughter, Kim's home.

Geneva Muriel Jones was born in Huffstuttle Community, Throckmorton County, Texas on August 7, 1927 to Oswald 'Roy' and Lillie Mae (Funderburk) Jones, eighth child of 10 girls and 2 boys. Her Grandpa Jones, who lived with the family, didn't care for the name Geneva and began to call her Merl, even though it was spelled Muriel (no one remembers why!) and it stuck. With the Great Depression on and little money, everyone had to pitch in tending livestock, raising food, and being taken out of school in the fall to "pull cotton," as they filled their hundred-pound sacks. But life was also filled with fond memories of running barefoot all summer, swimming, playing games, going to church, and singing at home while "Daddy played fiddle with Momma on piano." Merl was very athletic and never missed a chance to compete, including softball, volleyball and the girls' high school basketball team. School was the highlight of her growing up years, excelling enough to skip two grades and graduating at the age of 15.

At 17, near the end of WWII, Merl moved to Tucson, Arizona to be with her sister, Mona and while working in a diner, she met a handsome young man, George Winchester from Tennessee; the two married in 1945. David Lee was born in 1946 and in 1948 the family headed north to Greybull, Wyoming. Daughter, Kim was born in 1953. Although Merl and George later divorced, they fell in love with the Bighorn Basin/Mountains and both remained in the area. In 1963 she was recruited to work at the Washakie Hotel/Matador prompting a move to Worland with Kim while David remained in Greybull. It was here a customer dubbed her "Mertzie" and from then on, she was known locally as Mert. It was also at the Hotel that she became acquainted with Harry Swing and they married in 1975. They spent 35 plus years working long hard hours to make Swing Trucking a successful company and what a team they were -- Mert as secretary/bookkeeper and Harry doing what Harry did best. Some ranching and farming was thrown in the mix along with snowmobiling on weekends and building a cabin in the Bighorn Mountains, a place she loved very much.

Mert enjoyed a lifelong love of reading, crossword puzzles, crocheting, quilting, playing Bridge, and bowling for over 50 years. She was inducted into the Worland Bowling Hall of Fame in 2000 and was still bowling in her 80s. She loved watching football all of her days – especially college football – and even if you were outside, you could hear her whooping and hollering whenever her favorite team scored. For many summers she could be found working in her yard among her beautiful flowers and canning from her bountiful garden.

Mert treasured spending time with her six grandsons, especially at the cabin, and then later with their wives and children. Planning and cooking for crowds of family and friends brought her great joy. Her Texas family remained very close to her heart and trips "home" were made as often as possible where they stayed up all night talking and playing "42" (dominoes).

Mert was preceded in death by her parents; 2 brothers; 7 sisters; husband, Harold B Swing in 1999; son, David Lee Winchester in 2011 and great-grandson, Rylee James Douglas in 2019.

Per Mert's wishes no formal funeral services were held. A private family service was attended at Riverside Memorial Gardens plus several get-togethers sharing precious stories of Grammy. A trip to the cabin with the Winchester's is planned for this summer.

In lieu of flowers, memorial donations may be made to the Hurricane Lanes Youth Bowling Program and sent to PO Box 524, Worland, WY 82401. Online condolences may be made at http://www.bryantfuneralhomeonline.com