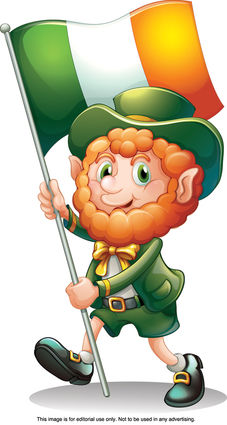 Part of what makes celebrating St. Patrick's Day so enjoyable is the scores of traditions surrounding the holiday. The month of March ushers in parades, festive foods, lively music, and as much green attire as a person can handle.

There are reasons for donning green clothing on St. Patrick's Day. If a person isn't in green, he or she just may get pinched. According to Irish folklore, leprechauns wore green, and if anyone else wore the color that individual would be invisible to leprechauns. Leprechauns are ornery sorts who like to pinch anyone they can see. Therefore, by wearing green clothing, a person is sure to avoid a painful tweak. It's not only the leprechauns who might do the pinching. Celebrants are inclined to pinch people who don't wear green as a reminder that leprechauns might sneak up on them at any time.

Beyond shamrocks and leprechauns, other people are inclined to wear green on St. Patrick's Day as a symbol of good luck and to honor their Irish ancestry. According to Brian Witt, the cultural exhibits coordinator for Milwaukee Irish fest, Irish Americans would wear green as a reminder that they are nationalists first and foremost.

The Irish flag colors are green, white and orange. The green symbolizes Irish nationalism, the orange represents the "Orangemen" of Northern Ireland, which is an Irish Protestant political society, and the white symbolizes peace.

Green is an integral color during St. Patrick's Day celebrations and it is tied to many different traditions.