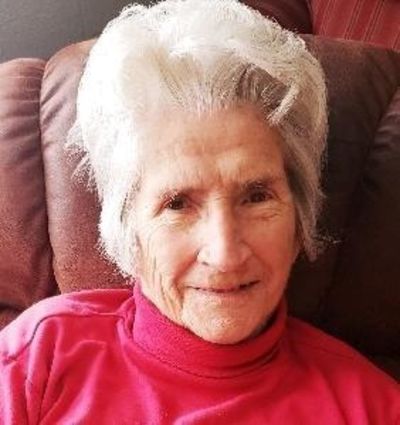 Doris Gullion, born Doris Laverne Booze, got her angel wings March 26, 2021. She passed away at the Worland Healthcare and Rehabilitation Center at the age of 90.

Doris was born to Virgil Clifton and Edna Alice (Winter) Booze on February 28, 1931 in North Platte, Nebraska. She was the first ever successful c-section delivered in North Platte. She started school at four years old as the teacher lived with her family. Her aunts were just a little older, so the teacher said they should take her to school with them. Her mother homesteaded on Whistle Creek in 1934, so her younger years were spent riding the train from North Platte to Lovell, Wyoming. She would get homesick for Nebraska while in Wyoming, but then she was homesick for Wyoming while in Nebraska. The family moved to the Byron area where Doris graduated in 1948 from Byron High School. On April 10, 1949 in Red Lodge, Montana, Doris married Richard Jerry Gullion, better known as "Steve". To this union four wonderful children were born, Sharon Kay, Edward Jerry, Steven Ray, and Randy Alan.

Doris was a longtime resident of Powell, Wyoming, but moved to Meeteetse in 1969 residing there until 2005 when she returned to Powell. Doris made many lifelong friends while working at the Meeteetse Mercantile, the Meeteetse Museums and selling Shaklee for many years. She earned two cars selling Shaklee and showed her boys how she ran a self-employed business. She met many people from all over the country and kept in contact with them. She loved her family unconditionally and enjoyed spending time with them more than anything. Besides her family, her greatest joy was her enormous garden and her flowers. Watching birds take birdbaths and feeding her bunny, who resided in her backyard, were highlights on any day. She instilled her gardening skills on her children, they learned how to work, pulling weeds, or picking produce for eating and preservation. She taught many people how to put up that produce by canning and made the best fudge and peanut brittle around! When enjoying a good meal from the bounties of her garden, she would often quip, "Mmm, Mmm, Mmm, What a deal!" Doris was a beloved mother, grandmother, great-grandmother, great-greatgrandmother and friend. She always loved to have company and one always felt at home in her presence. She will be missed by all who knew her.

Doris was preceded in death by her husband Steve, daughter Sharon Kay Geiser, both her parents and half-sister Marion (Klitzke) Briggs.

The family ask that in lieu of flowers, donations be made in her name to the American Legion Post #26 Auxiliary (Powell, Wyoming) and sent to PO Box 524, Worland, WY 82401. Online condolences may be made at http://www.bryantfuneralhomeonline.com.