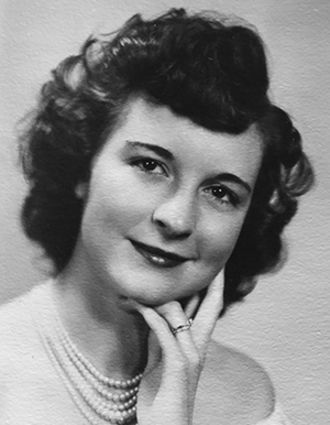 What a wonderful Wyoming life Joyce (Myers) Dierks lived, although it started on a cold Cedar Rapids, Iowa Sunday morning on January 4th, 1931. George (Yank) and Winifred (Peggy) Myers welcomed their first born into the challenging era of the Great Depression where Joyce would learn discipline, dedication, and humanity. Yank's career in the U.S. Army located the family (later four girls – Joyce, Dorothy, Shirley, and Mary Jean) from Iowa to Texas, Louisiana, Hawaii, and her beloved Wyoming where Joyce graduated from Sheridan High School in 1949 and was known for her beautiful singing voice and sweet personality. Her yearbook referred to her as the "prettiest songbird in America".

That same year she married her high school sweetheart Dale Maxwell and the couple was blessed with two well behaved children, John Robert and Jenny Lynn. They later divorced amicably and with help from Myers and Maxwells, John and Jenny thrived and grew as Joyce worked in Sheridan as waitress, switchboard operator, and later at Angionette's as an elevator operator(white gloves required!) and was promoted to sales associate (she loved clothes!). In the mid 50's, Joyce was offered a lead vocalist position with the Paul Weston Orchestra after auditioning for Paul at Casper's infamous Beacon Club but after serious consideration, she declined the offer out of concern for children and her priorities as a mother. She did continue her gift of voice throughout her life in churches, choirs, weddings, funerals, and groups (Thermopolis Holy Cats). Had it been Lawrence Welk instead of Paul Weston, he probably would have offered her position as "Champagne Lady" becoming the next Alice Lon or "lovely Miss Norma Zimmer"!

Meanwhile, a native Wyomingite from Ranchester and UW graduate, Jerry Dierks was teaching in Lingle. He was engaged to lovely Rosemary from Lingle (no, not Rosemary Clooney) teaching in Sheridan and living in the same boarding house as Joyce and the children (she and Joyce were good friends). Jerry appeared one evening to pick up Rosemary and was introduced to Joyce and the kids; he was smitten with Joyce and children so he ended the engagement to court Joyce. He proposed marriage after two weeks! Joyce finally accepted and married the love of her life on July 10th, 1956 and thus began their story that remained for 53 years until Jerry passed in 2009. And yes, Joyce and Rosemary remained friends – that really was "the Greatest Generation!" Jerry always said that Joyce was his "Doris Day!". The couple was blessed with two "not-so-well behaved boys", Jay Alan and Jeffrey Lee (I can say this as I'm one of them and maybe I shouldn't speak for my brother Jeff, but...). All families have challenges and ours was no exception, but ours seemed to work out all issues through love and listening. We were blessed to have had three sets of grandparents who treated us equally in love/support and parents who encouraged individuality, faith, and family.

By this time, Jerry had left teaching and taken a position with the Federal Government (Soil Conservation Service) and remained for 30 years - it started in Lovell, then transfers to Basin, Torrington/Lingle, and finally Thermopolis. During years of living in various parts of Wyoming, Jerry and Joyce made many wonderful Wyoming friends and here are just a few that deserve a shout out: John and Donna Day of Sheridan; DuWaine and Lauriena Curtiss of Basin – Lauriena passed just 8 days after Joyce "As The (their) World(s) Turns (turned)"and intersected, paralleled and connected throughout their lives; George and Estie Goble of Lingle, Worland, Buffalo – this fearless foursome was known to cut a mean rug to Bobby Darin's Mack the Knife and stir up mischief at The Brass Rail and "The Good(?) Place" in Kirby and Worland's wild Washakie Grill; other Lingle legends were neighbors George and Isabel Hill and Bill and Willa Mae Hill; Lingle town folk friends- Pep Rodin, Bob Rose and once again, George and Estie Goble's residence aka the "Goble Goodtime House"; Danny and Helen Danielson of Torrington and Lovell; Torrington neighbors - Bill and Phyllis Carter; Irl and Gloria Maxwell of Casper; Jerry Langbehn of Thermopolis; Neighbors on Thermopolis' Mondell Street were – Don and Shirley Irelan(Joyce and Shirley were a Lucy and Ethel duo – always up to something! Shirley acquired nickname of "Frog Lady" because of grandson Tracy! And the "duo" terrorized many friends, businesses, and unsuspecting dogs and cats during Crazy Daze-Days with their Air Horn Antics"), and across the street was Von and Ester Miller and up the street was Bob Sr. and Dorothy Milek. Thanks to all these wonderful folks for filling Jerry and Joyce's lives with love and support and fun!

Joyce was dedicated to her husband, children, grandchildren, and friends and was known for her big heart. She once sent a friend over 100 get well cards throughout cancer treatments – Joyce loved to write letters and send greeting cards and her Christmas card lists grew larger every year! In lieu of flowers or donations, please pass on acts of kindness and acceptance to others as Joyce always did – or send a greeting card and in the immortal words of Lawrence Welk, "keep a song in your heart" as Joyce spread "joy" with her voice throughout her lifetime. Joyce departed for heaven on Sunday, January 31, 2021.

Cremation has taken place and services will be held in late May/June with Mortimore Funeral Home in charge of arrangements.