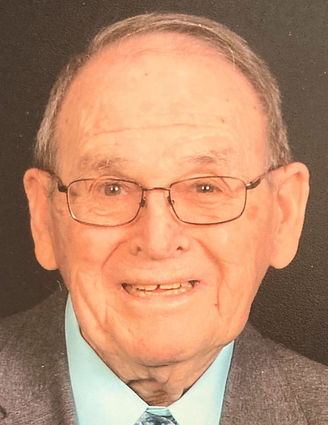 LeRoy Howard Fabricius, 88, went home into the arms of the Lord on April 21, 2021 in Worland. He was born on October 22, 1932 to Jake and Wanita Fabricius in Riverton, WY. LeRoy was sandwiched between an elder sister and younger sister. His dad was a farmer and consequently they moved around quite a bit when he was a child. One of those moves was to Ten Sleep where LeRoy and all the kids got out of school during beet harvest to help at home. He had to row and top the beets by hand.

LeRoy graduated from Burlington High School and decided farming wasn't for him so he enlisted in the United States Air Force in 1953. While serving overseas in England, in 1955, he met the love of his life at a dance. LeRoy and Yvonne Judy Mackness got married on September 8, 1956. Upon discharge, LeRoy and Judy returned to Ten Sleep. LeRoy worked at Phillips 66 and then the Mobil station before he and Judy moved to Worland in 1965. He delivered bread for Merz Bakery, worked for Montgomery Wards as its service manager and other odd jobs before retiring from Unical (now Devon Energy). LeRoy also spent many years working at Veile Mortuary with David and Diana. Along the way the couple was blessed with two daughters, Cheryl and Debbie.

LeRoy was a faithful member of Zion Evangelical Lutheran Church. He served as head usher for many years. LeRoy enjoyed fishing, he especially enjoyed eating fish. He was also fond of spending time in Ten Sleep, the 4th of July parade was always a favorite. You could find no better friend than LeRoy, he was known as a "gentle giant".

He was preceded in death by his parents Jake and Wanita Fabricius; his sister Gerry Taylor; and two brother-in-law's, Kenneth Ogg and David Taylor.

Funeral Services and Interment have taken place. Memorial donations may be made to the Zion ZEST Fund, P.O. Box 376, Worland, WY 82401. Arrangements have been entrusted to Veile Mortuary.