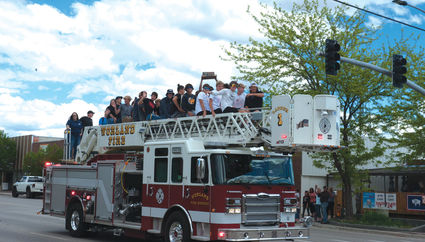 The Warriors roll down Big Horn Ave. with the 2021 3A State championship trophy on May 25. The Warriors beat Powell 1-0 in the 3A State boys soccer championship game in Cheyenne on May 22 to win their third straight state title.

WORLAND - A lightning delay only delayed the inevitable as the Worland Warriors won their third consecutive 3A State boys soccer championship on May 22 at Cheyenne South High School in Cheyenne.

The Warriors (17-0) defeated 3A West rival the Powell Panthers (14-3) 1-0 in the title game. The win not only clinched the Warriors the three-peat but extended their winning streak to 46 games, clinched...