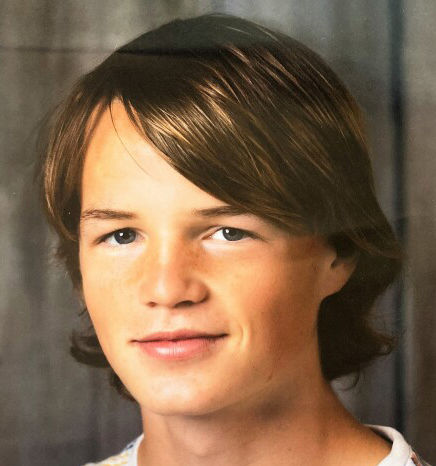 It is with the heaviest of hearts to announce the passing of Clint on June 22, 2021. He charged into this world on August 18, 2004 in Cody, Wyoming. Being the baby of the family, Clint was a difficult toddler always demanding the attention of his siblings. As he grew to take his first steps you'd always spot him gripping his beloved green "blankey" with his small balled fist. He then took on the exploration of this world with the companion of multiple stuffed cats and his books (many, many books). It was evident at a young age that Clint had a brain that ticked like no other. He had a way of thinking that was beyond what his parents could understand. When it was clear that we did not have the intellectual answers he was looking for, our comment continued, "You know, I truly don't know, you should Google it."

Clint began competing in swimming at a young age. He figured if his brother was doing it, he might as well too. He excelled at the sport, particularly the breaststroke. It was his friendships with Gage & Traeten that were the best gifts he received from the sport. Clint also participated in cross country. He would never admit to "liking" running but he loved the friendships, the dedication of the coaches and the positive atmosphere. His first job was washing dishes at Green Hills restaurant. His earnings went to buying his own phone. He then built his own computer (that he meticulously accounted for). He would tell you that building the computer was one of his greatest accomplishments. He studied and cognized every facet of his project, watching him assemble each part and piece had never looked so natural to a person. Clint was a quiet teen, usually only speaking after being spoken to. But that mind was ALWAYS thinking. His thought process was beyond what the rest of us could comprehend. Even though his intelligence was high, he never let anyone feel inferior. His friends were able to joke about their inability to keep up with that kid's mind. Clint's comment upon the completion of the Academic Decathlon, "That was the most fun thing I have ever done."

Clint was a snowboarder, a certified scuba diver, a wakeboarder, and became certified in QuickBooks. It was clear that academics was his love. He spent last summer teaching himself Japanese & German, as well as listening to Spanish CD's on longer drives.

Clint had a special connection with his sister. It was their time together where we saw his silliness and goofiness come alive. As they became young adults, they would share conversations on many subjects as well as ponder the meaning of life. During COVID, Clint found an interest in the Sundance Movie Festival and found some favorite film directors.

Clint's time on earth was too short but we cherished it.

A Memorial Service will be held Friday, 10am, July 2, 2021 at St. Alban's Episcopal Church with Reverend Linda Anderson officiating. Memorials can be sent to either New Hope Humane Society, P.O. Box 1704, Worland, WY 82401 or Security State Bank, 320 N. 10th St., Worland, WY for a memorial scholarship. Arrangements have been entrusted to Veile Mortuary.