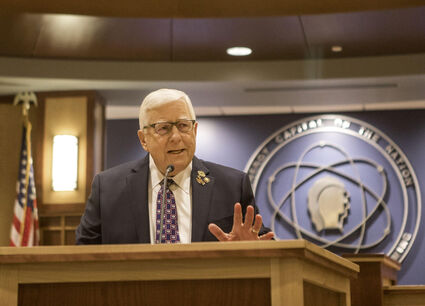 U.S. Sen. Mike Enzi, who died late Monday from injuries sustained in a bicycle accident, is shown here announcing in May, 2019 that he won't run for a fifth term.

CHEYENNE, Wyo. – Governor Mark Gordon and all of Wyoming mourn the loss of former United States Senator Mike Enzi, who passed away last night from injuries suffered in a bicycle accident in Gillette.

The Governor has ordered both the U.S and Wyoming flags to be lowered immediately to half-staff. They will remain at half-staff until sundown at the day of interment. Once that date has been established, the Governor's office will send out another notification to advise when the flags will be returned to full-staff.

The Governor has issued the following statement:

“Mike was a friend and a dedicated public servant who cared deeply about Wyoming and its people. His leadership in the Senate was tireless and productive. He was a strong advocate for the state’s interests and was always committed to finding consensus where possible. He understood what is important for America.

We are all heartbroken by this terrible loss. Jennie and I join the thousands offering their prayers and well wishes for Diana and the Enzi family. God Bless you Mike. Thank you for your service, and Godspeed.”

Former U.S. Sen. Mike Enzi died late Monday after being seriously injured in a bicycle accident in Gillette on Friday.

A post on Enzi's Facebook page said the former Wyoming legislator died Monday at the UCHealth Medical Center of the Rockies in Loveland, Colorado, where he was flown for treatment after the accident.

"Former Wyoming U.S. Senator Mike Enzi passed away peacefully (Monday) surrounded by his family," the post said. "His family expressed their deep appreciation for all of the prayers, support and concern that has been shown."

Enzi was injured around 8:30 p.m. Friday while riding his bike near his Gillette home, the Gillette News Record reported.

Gillette attorney and family friend John Daly was quoted by the News Record as saying Enzi had broken his neck and some ribs in the accident.

The Facebook posting said Enzi never regained consciousness after being taken to the Colorado hospital.

Enzi served four terms in the U.S. Senate, winning his first term in office in 1996. He retired in 2020 and former U.S. Rep. Cynthia Lummis was elected to replace him.

Before going to Washington, D.C., Enzi served as both a representative and senator in Wyoming's Legislature, where he held office from 1987 to 1997.

He was born in Washington state and grew up in Thermopolis. After attending school at George Washington University, where he attended his degree in accounting, he earned a master's degree in marketing from the University of Denver in Colorado.

He moved to Gillette in 1969 and expanded his father's shoe sales business, NZ Shoes.

Officials across Wyoming mourned Enzi's passing on Tuesday, remembering him as a tireless worker on behalf of Wyoming's interests in both Congress and the Wyoming Legislature.

"Mike spent his life working to make Wyoming a better place while creating opportunities for our people," Lummis said. "He always put Wyoming first and worked harder than anyone to serve his constituents."

Lummis, who served with Enzi for nine years while she was a U.S. representative, joined U.S. Sen. John Barrasso in praising Enzi as a soft-spoken legislator who could get things done in a bipartisan manner.

"Mike was a problem solver through and through," said Barrasso, who served in the Senate with Enzi for 13 years. "More than 100 Enzi bills were signed into law by four U.S. presidents. Many passed with overwhelming bipartisan support."

U.S. Rep. Liz Cheney, who served in Congress for four years with Enzi, remembered him as a mentor and teacher with a dry sense of humor - and a dedicated champion of causes he cared about

"Mike was a straight-shooter, an honest broker, and a soft-spoken but powerful advocate for the causes he cared deeply about," she said. "Whether it was pushing for fiscal discipline as head of the Senate Budget Committee or fighting for the needs of Wyoming's energy industry, Mike was always guided by principle and conviction."

Other officials around Wyoming expressed their sorrow Tuesday, including state legislators such as Sens. Tara Nethercott and Anthony Bouchard, both R-Cheyenne, and Rep. Charles Gray, R-Casper.

"While we mourn Senator Enzi's passing, we are eternally grateful for his distinguished service to Wyoming and our nation, his advocacy and love for all things Wyoming, and the incredible example he set for us all as a true statesman and committed public servant," Nethercott wrote on her Facebook page.