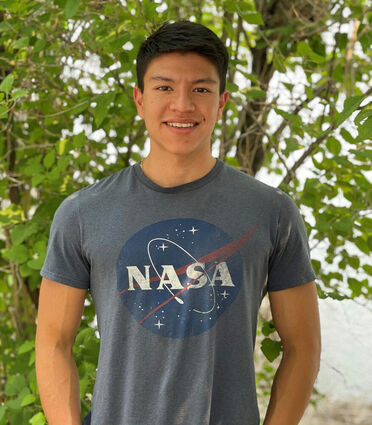 LARAMIE - University of Wyoming student Aaron Vigil, of Worland, is among 50 NASA interns scheduled to watch the live launch of the Boeing Starliner this Friday, July 30, as part of an unmanned flight to the International Space Station. Liftoff is at 2:53 p.m. EDT -- from the Cape Canaveral Space Force Station.

The Boeing CST-100 Starliner is a reusable crew capsule that will transport NASA flight crews to the orbiting space station and other low-Earth orbit destinations. Boeing manufactures it for its participation in NASA's Commercial Crew Program.

This is the second unmanned test of the Starliner capsule that will focus on if the system can safely carry astronauts to and from the space station, according to NASA.

"This is a once-in-a-lifetime opportunity and one that I am greatly looking forward to," says Vigil, a 2019 Worland High School graduate, and the son of Delilah and Albert Vigil.

The launch event ends NASA's intern celebration week and is a chance for the agency to show others the opportunities NASA has to offer. In addition to the launch, Vigil will meet with NASA Head Administrator Bill Nelson, a former U.S. senator from Florida.

"It truly is an honor to be able to attend, and I look forward to proudly representing my hometown and state at the launch," Vigil says.

Vigil is finishing his internship virtually this summer in Worland. His internship focuses on the 3D modeling and rendering of early spacecraft, and helps to preserve many of the first spacecraft to leave Earth's orbit. He says the software he has been using for his NASA project is "more artistic" but is similar to software he uses for his UW engineering projects.

"My specific task was to model the Soviet-era Mars 2 and 3 landers using software known as Blender. The models and images I create will then be used to archive the spacecraft for future reference and educational usage," he says. "This summer, I have seen an incredible growth in my software-created modeling abilities, which will translate well to my work in the engineering field."

Vigil's internship will culminate with the presentation of his work at various NASA intern events. The events will showcase the work completed over the summer and will be presented to the Goddard Space Flight Center mentors and faculty members. Presentations will be virtual and open to the public.

Vigil adds that being able to attend the launch event shows that, at UW, anything is possible for all students.

"At my roots, I am a small-town Wyoming kid who had a dream to explore the stars. The University of Wyoming offered me the chance to affordably pursue a degree in a field that would allow me the opportunity to live out my dream. It is something not many schools can offer," he says.

He adds that many UW mentors have helped him achieve his goals and are willing to help all students, regardless of their professional aspirations.

"It was through these connections that I was able to find out about the opportunity to intern at NASA. Without the University of Wyoming, I would not be where I am today," Vigil says. "I think it is important for all students, especially those across the state of Wyoming, to understand that anything is possible at UW. The opportunities are there, and people are willing to help."

Vigil hopes to further his education, setting his sights on earning an aerospace engineering doctoral degree.

"My hope would be to one day work in the field of aerospace and aid in the human exploration of the solar system and beyond," he adds. "It has always been a dream of mine to be a part of the next generation to explore the stars, and I believe I am now closer to that goal than ever."