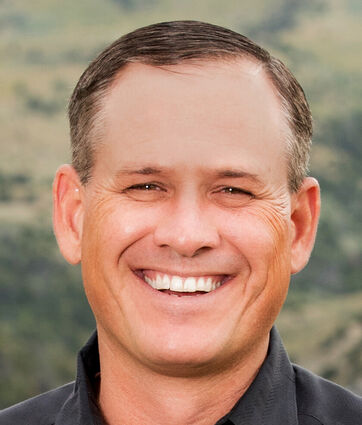 Joey Lance Johnson, 51, passed away Saturday, August 7, 2021, at his home in Thermopolis surrounded by family and close friends. He fought a courageous battle against pancreatic cancer.

Born January 21, 1970, in Newcastle, Wyoming, he was the son of Garry and Barbara (McDaniel) Johnson. With fond memories of his childhood, Joey graduated from Newcastle High School, then attended Casper College earning several national awards in livestock judging. He then attended the University of Wyoming acquiring his bachelor's degree.

Joey began teaching agriculture education and FFA in Cody, WY, then in Belle Fourche, SD, as well as Rock River, WY. He met his future wife, Melissa McCumber, while teaching in Rock River and working on a master's degree at the University of Wyoming. On October 7, 2000, he married Melissa in Thermopolis. The couple first lived in Newcastle, but soon moved to Powell when Joey became the livestock judging coach and Ag pavilion manager for Northwest College.

His collegiate livestock judging teams placed in the top three nationally and he coached a national champion individual at the Dixie National Contest. He was also the Wyoming FFA Foundation Executive Director. While living in Powell, the couple started a family.

Joey loved his three boys dearly. He spent countless hours driving to junior golf tournaments, selecting and fitting livestock, and planning camping and hunting adventures. He always made sure their birthdays and holidays were special. Joey and Melissa enjoyed an occasional get-away, but most of their time was spent working as a team raising their three boys and spending time with extended family.

In 2005, Joey returned to teaching Ag and FFA in Meeteetse, WY. In both Belle Fourche and Meeteetse he coached several state champion teams and several of those went on to rank in the top five nationally. The family eventually moved to Thermopolis. Joey later worked as the 4-H and Youth Development Educator for Hot Springs County. He grew the program and volunteer base in several areas and had coaching success again in livestock judging. In addition to 4-H he helped coach a few local FFA teams and even coached golf for one year, earning State 2A Golf Coach of the Year.

Besides his coaching accolades, he was a Wyoming State FFA Officer, a Wyoming National FFA Officer candidate, and bred and raised the 1998 National Champion Suffolk Ram. He was a 2004 Honorary Wyoming State FFA Degree recipient, the 2008 Wyoming Ag in the Classroom Agriculture Advocate of the Year, and the 2013 Teacher of the Year for Park County School District #16 and 2018 Thermopolis MS Parent Partner Award recipient.

He served on the Park County Fair Board, Wyoming State Fair Advisory Board, and the Thermopolis Golf Board. He was a member of the WY Vocational Ag Teachers Association, Association of Extension 4-H Educators and a member of the First United Methodist Church in Newcastle, WY.

Joey leaves behind his wife, Melissa, of twenty years; children, Hardy, Hadley, and Hayden, all of Thermopolis; mother, Barbara Johnson and sister, Marni Hossfeld of Newcastle, seven nephews and one niece. He was preceded in death by his father, Garry, and grandparents, Gordon/Jean Johnson, and Floyd/Marion McDaniel.

A Celebration of Life will be held Saturday, September 25, 10:00 AM at the Hot Springs County School Auditorium in Thermopolis.

Mortimore Funeral Home is assisting the family. Messages may be offered at http://www.mortfh.com.