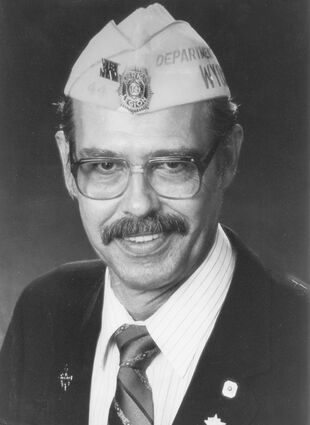 Todd Eugene White, 76, died August 14, 2021 at Washakie Memorial Hospital of natural causes. He was born September 23, 1944 at Ivinson Memorial Hospital in Laramie, the son of James Harold and Fern Edna (Wilt) White. He had an older sister, Janet Joan. He attended schools in Laramie, graduating in 1962. He played football and basketball in high school for the Laramie Plainsmen.

White entered the University of Wyoming in the fall of 1962, graduating in 1967 with a Bachelor of Science degree in Architectural Engineering with a Civil Engineering background in May 1967.

He married Shirley Phillips, nee McDonald, in 1967 and adopted her children, Sheryl and Howard.

White was drafted into the U.S. Army in July 1967 and was sent to Ft. Campbell, KY for Basic Training. Following Basic, he was stationed at Ft. Sill, OK, where he was assigned to the research and Development section of the Artillery School, teaching mathematics and architecture to officers. He said this consisted mostly of teaching artillery officers how to use a slide rule, an important part of their combat training.

His next duty station was in the Republic of Vietnam, by way of Seattle, WA and Bien Hoa Airport RVN. He was assigned to the 125th Transportation Command at the Port of Saigon, where he was driver and bodyguard for the unit commander. His tools of the trade were an M-16 rifle, an M-14 rifle and a .45 Colt semiautomatic handgun. White said he kept ammunition for the weapons stashed everywhere he could in the cars. The colonel’s vehicles were a jeep and a Ford 1965 four-door sedan staff car, depending on the mission.

On one mission, he said, he was in a convoy of 2 ½-ton and 5-ton trucks to Long Binh at night when the enemy struck. “Charlie hit us, hit us pretty good,” White said. The unit conducting the convoy was a National Guard unit from North Carolina, he said, and one of their soldiers was killed.

In July 1969, White’s colonel saluted him, wished him well, and awarded him the Army Commendation Medal. Upon returning to Laramie, White said, “My head was spinning, I didn’t know what I was doing.”

Later in 1969, White and his family moved to Worland, where he was employed as an architect by the John Toohey architect firm. Among their projects was designing the hospital.

Nineteen sixty-nine was an important year for White in another way. It was the year he purchased a 1969 Mercury Cyclone Spoiler from Paul Smith at Worland Ford. It was a factory-ordered 429 horsepower muscle car in the age of muscle cars and it was his pride and joy.

That time was also in the days of the Ten Sleep Hill Climb, a timed event with drivers challenging the old road up the Ten Sleep Canyon from the fish hatchery. “I drove it one time,” White said. “That was a scary S.O.B.”

So the Spoiler was retired from racing, but was still White’s favorite ride. “That was the treasure,” he said of the blue muscle car.

In 1974 he went to work for the Wyoming Highway Department as an engineer on road projects. Working his way up through the system, White retired as District Finals Engineer in Basin for the Wyoming Department of Transportation, successor to WHD.

In the early 1970s, White joined the Worland Jaycees, and was Worland president the same year the late Wyoming Senator Mike Enzi was the Wyoming State Jaycees president. Then in 1974 White and a group of Jaycee friends who were all Vietnam veterans, joined Floyd Minch Post 44 of The American Legion in Worland. Along with White were Gordon Maxwell, Rich Foltz, Ken Krug and another friend. The others have moved on, but Maxwell is a Paid Up for Life member of Post 44.

He has served on The American Legion National Public Relations Commission from 1986-1998, the Veterans Preference Committee 2002-2003, the National Legislative Council as Vice-Chairman 2004-2009, the Foreign Relations Commission 2004 to the present, and the National Commander's Advisory Committee 2007-2011. He was President of the National Past Department Commanders Club in 2004-2005 and currently serves on the Executive Committee. He was appointed to the Veteran Affairs and Rehabilitation Commission's Veteran Affairs Facilities Advisory Committee in 2003- 2004 and then has served on the "System Worth Saving" Task Force from 2004 to the present.

‘A System Worth Saving’ was a multi-year examination of the Veterans Administration hospital system. With other committee members, White traveled to VA hospitals all around America, examining all aspects of a hospital’s operation to determine how efficient it was at delivering first-class health care to veterans. There were many problems. “We were there to ask the tough questions and tell the hard truths,” he said.

“It involved having the ability to travel and literally contact one-on-one with people high and low,” he said.

He is survived by his daughter-in-law Sandy Phillips, grandsons Chase Phillips, John (Rachel) Rydquist, Michael (Noela) Rydquist; granddaughters Kerry Phillips (Jerry Wilson) and Jamie; and great-grandchildren, Cheyenne, Dylan, Delayni, Jayden, Lyhra, Riley and Aydree. He will be missed by family, extended family, friends and his loving neighbors (he has ALWAYS had the best neighbors!).

Memorial services will be held 11:00 am, Saturday, September 18, 2021 at the Bryant Funeral Home Chapel. Inurnment will follow at Riverview Memorial Gardens Cemetery with Military Honors provided by the U.S. Army and American Legion Post #44. Memorial donations may be made to the American Legion Post #44 and sent to PO Box 524, Worland, WY 82401. Online condolences may be made at http://www.bryantfuneralhomeonline.com.