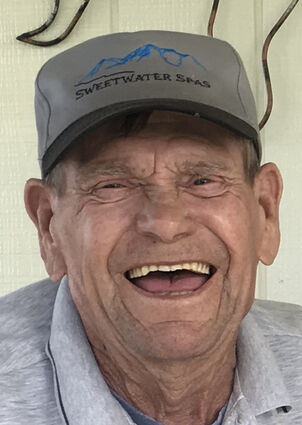 Arley Love passed away peacefully at the age of 83 on May 17, 2021, surrounded by his family, at Hot Springs Health, after a long, valiant fight with cancer. He soldiered through his last few months, still determined to take care of his own home and yard. Although he was willing to begin another round of cancer treatments, sadly, his body said, "no more."

Arley was born in Thermopolis, on August 24, 1937, the eldest child of Cleo and Daisy (Renner) Love. Apart from three years spent in Burlington, where he graduated high school and where he lived and worked on his uncle's farm, he proudly lived his entire life in Thermopolis. At the age of 18, he briefly worked in Lander, helping to build the road through Sinks Canyon, where his job was to set the dynamite to clear boulders. From there his work history included working on a seismic crew, roughnecking for various drilling and well service companies, and eventually settling into a 26-year career as a lease operator for Texaco on Black Mountain.

On December 13, 1959, Arley married his soulmate, JoAnn Johnson. Together they had two daughters, whom they raised to love, respect, and appreciate the wide-open spaces of Wyoming, especially the Big Horn Mountains.

In his younger years, Arley was an avid hunter, with a passion for fly fishing. In more recent years, he settled for lake and reservoir fishing with his friends and family. Arley was also known for his beautiful garden, which he pampered, fussed over, and worried about from early spring until the last potato was dug in the fall. He generously shared each year's bounty with friends and family throughout the town. He will be greatly missed by many, but fondly remembered for his kind, generous heart, and big, contagious laugh.

Arley is survived by his loving wife of 61 years, JoAnn, and his daughters, Mitzi Love and Cindy (Ray) Campbell. He is also survived by his grandchildren: Kaleigh (Monty) Winn, Skyler (Erica) Stephenson, TJ Campbell, Clarissa Stephenson, and his great-grandson, Silas Stephenson. He is preceded in death by his parents and his brother and sister, Wendell Love and Sharon Batten.

A Celebration of Life will be held on Saturday, August 28th from 11 AM to 3 PM at the Thermopolis Fire Hall.