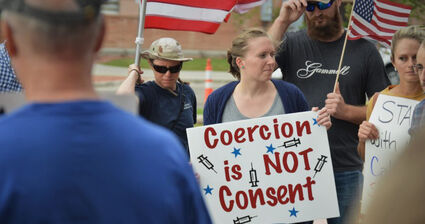 An anti-vaccine activist holds a sign at a demonstration outside of a meeting of the Legislature's Joint Committee on Labor, Health and Social Services in Casper

A group of activists that included healthcare workers commandeered a meeting of the Wyoming Legislature's Joint Committee on Labor, Health and Social Services Thursday to demand legislative action against COVID-19 vaccination requirements at medical facilities around the state.

After the meeting, nearly 80 people gathered outside to demonstrate against vaccine mandates.

Though COVID-19 vaccinations or mandates were not on the labor committee's agenda, activists from as far as Gillette and Worland took up several hours of the meeting to express concerns with workplace vaccination requirements, particularly at Banner Health facilities in Worland and Casper. The Phoenix-based healthcare provider mandated employee vaccinations at all of its facilities nationwide on July 20, citing the rising prevalence of the more contagious delta variant and the disproportionately high rates of hospitalization among unvaccinated COVID-19 patients.

Banner did not immediately return a request for comment.

The committee had advanced legislation to limit employers' ability to mandate vaccinations at its June meeting.

The presence of the group, which featured Wyoming Medical Center employees, naturopaths and former state legislator and pastor Scott Clem, appeared to surprise committee members. However, members of the activist group, Wyoming Medical Freedom Advocates, told WyoFile they attended on the urging of committee member Rep. Pepper Ottman (R-Riverton), who praised them for their bravery in speaking out during the meeting.

"We want people to know they're not alone," said Chandra Wagner, an organizer of the group, who said she left her job as a nurse at Wyoming Medical Center over its vaccine requirement.

The meeting was scheduled to begin with a discussion on Wyoming's aging population and the consideration of several pieces of legislation to address its needs. Before that began, however, the committee allowed four medical professionals - including an ICU nurse, an anesthesiologist and a dentist - to present. They had come to express concerns about vaccination mandates issued in recent weeks by healthcare providers and President Joe Biden.

After their presentation, other activists - most current or former medical staff - took to the podium to echo those concerns. The several-hours-long discussion delayed most of the committee's agenda for the day.

Some said the vaccination mandate had created an environment of "tension and hostility" between those who had been vaccinated and those who had not. Others raised fears over the possibility they could be fired for refusing to be vaccinated or that some professionals might leave the field, with one deriding hospital administrators as "fascists." Others parroted questionable claims the COVID-19 vaccine has led to thousands of deaths and lamented a lack of access to the veterinary dewormer Ivermectin, which has not been approved by the FDA to treat the virus.

One person to testify, Gillette physician's assistant Alison Brady, claimed there were an equal number of vaccinated COVID-19 patients on ventilators as unvaccinated ones at Cheyenne Regional Medical Center, a fact refuted by the hospital's statistics. (Just 15% of CRMC's ventilator patients were vaccinated as of Friday, according to hospital CEO Timothy Thornell.)

At a rally following the meeting, Sen. Troy McKeown (R-Gillette) told attendees to "stay strong" and resist getting vaccinated. Other lawmakers urged attendees to challenge hospitals desperate for personnel amid the state's current shortage of medical staff.

The group's attendance was part of a growing movement against vaccine mandates that includes Gov. Mark Gordon and members of Wyoming's Legislature.

President Joe Biden announced on Sept. 9 a mandate that would require vaccines or regular testing for businesses with at least 100 employees. In the wake of the announcement, Gordon joined other Republican governors in seeking to defeat the rule, and announced that there may be a special legislative session as early as October to address the issue.

Groups like WMFA have distributed flyers around Casper encouraging opponents to rally against the vaccines, and protests have taken place from Worland to Cheyenne.

"We are the majority!" she claimed to cheers.

Some 37% of residents were vaccinated as of Sept. 13, according to the Wyoming Department of Health.

Pressure on lawmakers to take action is high. In his own testimony before the committee, Clem told lawmakers that if government doesn't do its job, "the people will do it themselves." Others encouraged active resistance to the vaccine mandates, and to continue showing up to committee hearings to make their voices heard.

"Politicians will not respect you unless they fear you," Congressional candidate and Wyoming Sen. Anthony Bouchard (R-Cheyenne) said during Thursday's rally.

While some nursing homes in Teton County have vaccination rates from 70%-90% among staff, facilities in other jurisdictions are closer to 30%, he said. While hospitals do not track vaccination rates for staff, Centers for Medicaid and Medicare Services Data show just over half of nursing home staff in Wyoming have been vaccinated, among the lowest rates in the nation.

Because of the political nature of the discussion, those in favor of vaccine mandates have been rarely represented at committee meetings, committee co-chair Sen. Fred Baldwin (R-Kemmerer) said. The conversation has gotten increasingly difficult, he added, since the Biden administration announced its mandate.

"We have not heard a pro-vaccine word," he told WyoFile after the meeting. "Nobody wants to put it out there, I don't think. They'll just get beat down to death. I hear people who are pro-vaccine who think you should get it, but anti-mandate."

Vaccine mandates did not appear on the committee's published agenda, and no public notice was given of the presentation, giving no opportunity for vaccine advocates to attend or respond in real time. Wyoming Legislative rules allow committee chairs a wide berth to conduct meetings as they see fit, Legislative Service Office director Matt Obrecht said.

"Chairmen have broad discretion for the effective conduct of their meetings and agendas are always treated as changeable," he said.

Recent polling has shown more than half of Americans approving of vaccine mandates at work.

On Friday, an eight-member majority voted to draft legislation banning coerced COVID-19 vaccinations ahead of its next meeting in November. Bouchard made the motion. A previous version of the bill failed in the Senate Judiciary Committee last winter by a 4-1 vote.