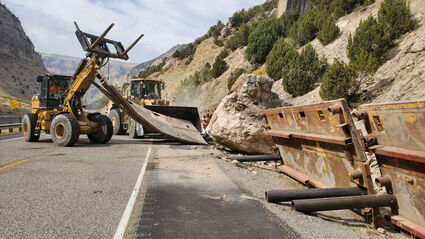 An estimated 500,000-pound rock was removed by the rock scaling crew on Tuesday, Sept. 28. The steel barriers did their job in protecting the highway, but they were damaged by the big rock. The 500,000-pound rock weighs about as much as 10 fully-loaded WYDOT plow trucks

An $8.78 million slide stabilization/rock scaling project is continuing in Wind River Canyon alongside US20/WY789 between Shoshoni and Thermopolis, and a months-worth of rock scaling is scheduled to be completed next week.

"(Subcontractor) Midwest Rockfall is scheduled to complete rock scaling by the end of next week," said Wyoming Department of Transportation project engineer Jordan Erz of Worland. "Following rock scaling, prime contractor Oftedal Construction will continue to remove all the scaled rock, and the contractor will be breaking up all the large boulders so they can be loaded and hauled out of the canyon."

Erz said the 20-minute traffic delays will ease during rock cleanup efforts, and project work may continue this fall as weather allows. Work on the project is scheduled to resume in the spring.

This week's rock scaling highlight involved about three working hours by the rock scaling crew to remove a 500,000-pound boulder from above the highway for safety reasons. Erz said dirt was washed out under the big rock, and a channel for mud and water flows was cut underneath the rock.

"The big rock was very unstable. We are confident it would have fallen during or after a future large rainstorm, and at the very least, the big rock would have damaged the highway and caused a road closure," Erz said. "When the big rock was ready to roll toward the highway, we had a 28-minute traffic delay. We apologize for the lengthy delay, but safety is the top priority."