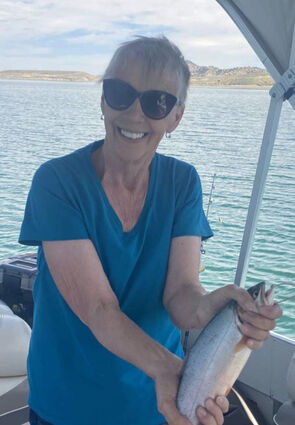 Wife, mom, nana, sister, aunt and friend, Margaret "Peggy" Jean Paxton passed away peacefully at Spirit Mountain Hospice on September 21, 2021 after a courageous battle with cancer. She was surrounded by her husband and her daughters as she was welcomed into heaven through her faith in Christ.

Peggy was born May 2, 1950 to John and Jean Ginther in Hastings, MN. She spent her childhood in Hastings, MN as well as on her grandparent's farm in Mauston, WI. Her love of cooking was inherited from her grandmother, Theresa King, as well as many family recipes enjoyed by so many over the years. Peggy will be remembered for her amazing pies, cookies, and family feasts as well as her infectious laugh, sense of humor and unending generosity.

Peggy accomplished a lifelong goal and graduated from nursing school in 1978 from Casper College, WY. She enjoyed her nursing career at the Bonnie Bluejacket Nursing Home as well as the Wyoming Sanitarium. Ultimately, she sacrificed her love of nursing and the necessary irregular hours and holidays away from family to join State Farm Insurance in Basin, WY in order to spend more time with her family. Peggy retired after 30 years with State Farm in April 2012 which allowed her to enjoy extra time with her youngest grandson Landon.

The simplest things in life brought Peggy the biggest smiles. She was happiest cooking, maintaining her home and yard, singing and dancing in her kitchen, teaching her grandchildren how to make her famous pies, trips to the library to feed her love of reading, and fishing at Sunshine Reservoir. Most of all, she loved her grandbabies. She even created her own Instagram account in order to keep up with all of their lives and was affectionately called Ouiser (of Steel Magnolia's fame) which she regarded as a great compliment. She was always the center of the family and everyone gathered at her home for a hot meal and laughter. Most of all, she kept busy keeping all of us "lined out."

Cremation has taken place and a private family service is planned for a later date. Memorial donations can be made to the Basin Library, PO Box 231, Basin, WY 82410 or the Big Horn Basin Cancer Center, 1025 9th St, Cody, WY 82414. Condolences can be left on Peggy's memorial page at http://www.BallardFH.com.