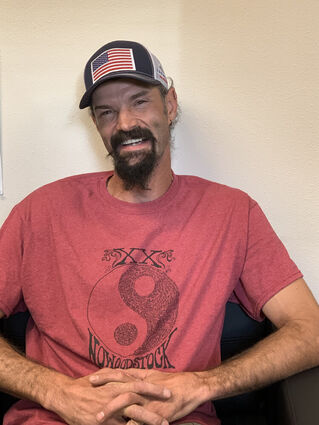 Jerry is a longtime resident of Worland. His journey into addiction started at the age of 8 when he was first introduced to alcohol at a "biker party" that his family attended. Jerry and other kids that were there would "sneak and drink wine and beer." Jerry said , "I didn't like it at that point. But once I got around the age of 14 or 15, I really started drinking." Weekend parties were frequent, and at the age of 15, he was introduced to marijuana. His marijuana use was "off and on" initially, but his alcohol use became more excessive. Jerry states that in the 10th grade, "I actually took alcohol to school. I drank it and then left because I didn't want to get caught."

Jerry was drinking frequently and smoking marijuana "on a regular basis before school and after school."

At the age of 17, Jerry dropped out of school and went to reside with his mother, who lived in Manderson. Jerry was working, but stated "I pretty much picked up drinking almost every night." Unhappy, Jerry soon returned to Worland, and stated, "that is when my life started spiraling out of control." At the age of 19, he first tried methamphetamine. Jerry's use was "off and on" until the age of 20 or 21, where he was introduced to cocaine and mushrooms.

Jerry decided to move to Sheridan and was working; however, he says he "spent more and more time with friends that were using meth heavily." Jerry then had a death in his family that spiraled him even further into his addictions.

He said, "My grandfather died, and that was that. It took control of me. I was using every day, if not, then every other day, and I started selling drugs. I ended up going to prison when I was 22 for selling drugs. I was in prison for 26 months. I got out and was sober for three years, but the day I got off probation, I was in Denver getting high." Jerry eventually moved to Ten Sleep. He started using methamphetamine daily for about a year and a half. He stated, "I started losing everything, my business, my relationship, so I moved back to Worland."

He decided to stop using meth, but stated he, "Started drinking heavily. I started going to the bar every day, even drinking while I was working."

By 2016, he had stopped using all substances, except alcohol. He said, "Things started looking up, I started getting a better work ethic, but I was still drinking or at the bar every day." That lifestyle continued for three years, until Jerry, "got in trouble with the law again due to my drinking habit."

While on bond he was prohibited from drinking; however, he decided to drink on Christmas Eve, resulting in "an altercation with my family members." That altercation was a wake-up call for Jerry. He says, "I haven't touched it since. I realized it's not worth it, the consequences and the actions that my addictions caused was not what I wanted in my life, and it wasn't worth it."

At the printing of this article, Jerry has 294 clean and sober days.

Jerry said, "I started treatment in September 2019 and was basically lying my way through it, but I realized I was my losing my family, so I had to invest in myself before I lost everything."

When asked what he gained from treatment, "knowledge, coping skills, my life, and I gained a lot of supportive friends that are in recovery as well."