Warriors fall to Cody 40-7 in 3A State playoffs 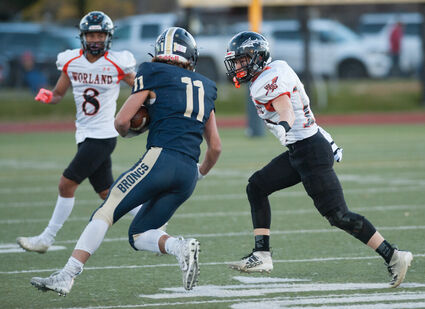 Warrior Taylor Pierce goes after at Bronc ball carrier while teammate Jorey Anderson comes up to help during Worland's 40-7 loss to Cody at CHS on Oct. 29 in the 3A State football playoffs.

WORLAND - For the third straight postseason, the Worland Warriors had their season end in Cody.

The No. 1 Cody Broncs, the 3A State defending champions, defeated the Worland Warriors 40-7 on Oct. 29 in Cody.

The Broncs sprinted out to a 21-0 lead, and the Warriors played catch up from there.

"Cody was prepared for everything we threw at them, and they just got after us," said WHS football coach Patrick Sweeney. "They're a team that gets better every single week. We were on our heels to start, and they went up a few, 21. You can't let a good team start fast. You have to get those stops and move the ball consistently."

The Warriors did get on the board with a Kade Weber touchdown pass to Carter Clark in the second quarter. They had another drive cut short with an interception that bounced of a Warriors receiver's hands.

Weber was hurt in the second half, forcing the Warriors to turn to backup QB Jorey Anderson. But as it was with Weber under center, the Warrior offense struggled to sustain drives.

Even with the adversities on both sides of the ball, the Warriors never gave up, no matter who was on the field.

"We had a good series in the first half and got a score out of it, but it was just too late. We had some of the best special teams I've seen, and I was really happy with that. We had another possession where we were driving in for another score. Unfortunately, we had a ball go through a receiver's hands, and Cody picked it off.

"Kade got banged up, and we went with Jorey, and we tried to do the best we could from there. We rotated guys on defense to keep them fresh, but at that point, it just got away from us. Our kids battled and continued to battle all game. Guys never dipped their head or quit, and I was super proud of that," said Sweeney.

That determination was an essential trait, among many, for this year's Warrior senior players. How they took charge of their offseason training and leadership roles is what Sweeney will remember most about this group.

"They're a great example of the effort and attitude of what it takes to be a Warrior. They were a great group of kids and athletes. I'm proud of how they carried themselves as young men and demonstrated what leadership is to the younger guys. We talk about being elite all the time and being the best you can be, preparing to be the best and giving it your all. This group exemplified that. Definitely going to miss them and were just a fun group to coach," said Sweeney.

The Warriors went 4-4 on the season and finished fourth in the 3A East.

Worland had a shot at the No. 1-seed when they played Douglas in the regular-season finale at WHS on Oct. 22. Had the Warriors won, they would have clinched the No. 1-seed. Instead, the 16-7 loss put Worland in a three-way tie with Buffalo and Lander.

Lander won the No. 2-seed with the best point differential between the three teams, beating Buffalo 22-12 and only losing to Worland by seven. That left Buffalo and Worland, and since Buffalo beat Worland on Oct. 8, 40-23, that gave Buffalo the No. 3-seed and Worland the No. 4-seed.

The point-differential tiebreaker has been something Sweeney and his staff stressed to the team. Now having seen how it dropped them to the No. 4-seed, the future Warriors see its importance.

"To be battling for the No. 1-seed, that's where we want to be as a program. We lost a three-way tie because of point-differential. That's why we've been coaching the kids why each point in those conference games is important. First, you have to win them, then you need to win them as best as you can. The kids are understanding that, and the younger kids will heed that going forward," said Sweeney.

The Warriors improved as a team and individually on all three levels, freshman, JV and varsity. The focus on fundamentals and creating competitive practices helped players develop this season.

Even when the season was done for the freshman players, those players still kept practicing with the team, wanting to help any way they could.

It was a full-circle moment, as the Warriors upperclassmen showed the freshmen the ropes early on only to have those same freshmen return the favor by helping later in the season.

"We had some freshman, even when their season was done, stay out and help us in practice. That was important. It fit with our 'Die to self' theme, and they really understood what that was all about. It was exciting to see that freshman class be so selfless," said Sweeney. "It was also good to see the older guys take the freshmen under their wings and teach them how we want to do things in the program. So to see the freshmen pay that forward, that's something we want to see keep happening."

The Warriors graduate 17 players, and with that, a lot of open varsity spots up for competition. Taking advantage of the offseason and being active in the winter and spring sports seasons will be the difference makers for players earning those spots on varsity or JV teams.

"With so many seniors leaving, the guys know they have the opportunity to contribute and step into roles that we need. There will be a lot of competition for those varsity spots and JV spots. That's something we'll talk about a lot in our exit interviews with those guys who are coming back.

"We had a pretty good summer this summer, and that showed on the field," said Sweeney. "Having that tradition in the summer, playing three sports, being in the weight room consistently, those are what will help develop players into athletes and a special football player."