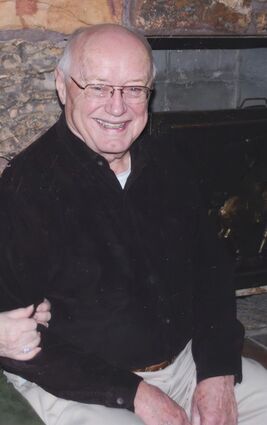 Beloved husband, father, grandfather, friend and Wyoming native John W. "Jack" Donnell passed away on Friday, November 5, 2021 at Cheyenne Regional Medical Center in Cheyenne with family by his side. He was 92 years old.

As a member of Worland, Wyo.'s business community, Jack owned and operated two businesses there, taking over his father's civil engineering and land surveying firm, George M. Donnell, Civil Engineer, in the 1950s, later to become Donnell & Associates, Inc. Later he and Bonnie started The Movie Center in the 1980s. Jack particularly enjoyed running The Movie Center and interacting with its customers.

Jack was born August 29, 1929 in Powell, Wyo. to George M. Donnell and Alice Files. After a few years living in Cody, Wyo., the family moved to Worland, where at the age of just three years old, Jack met the love of his life, his neighbor Bonnie Jean McKibbin. The two grew up playing together and started dating in high school, marrying on June 11, 1950.

Before that, Jack graduated from Worland High School in 1947, and was selected as Outstanding Senior Boy. He lettered in football and basketball, and frequent sporting opponent Pete Simpson observed that he "had the best legs in the Big Horn Basin." Jack next put those legs to work on Worland's semi-professional baseball team, the Worland Indians.

Jack later attended the University of Wyoming, graduating with a Bachelor of Sciences in Civil Engineering in 1951. He and Bonnie then went on to raise five children together and threw themselves into Worland life. Jack joined Worland's chapter of the Elks club, enjoyed regular golf games on Wednesday nights, and the family attended St. Alban's Episcopal Church, where Jack served on the vestry.

Jack and Bonnie enjoyed traveling at home and abroad. They made frequent trips to the Big Horn mountains for fishing and skiing, often traveled to Hawaii, especially to Maui, and toured Europe together on a Eurail pass in 1988.

The couple retired to Las Vegas, Nev., in the mid-1990s, where they lived for about ten years before returning to Worland.

They settled for good in Cheyenne in 2017.

Jack is preceded in death by his parents, George and Alice. He is survived by his wife, Bonnie; their five children, Jeffrey (Deb), Michael (Mary), Kimberly (Terry), Timothy (Debbie) and Traci; 12 grandchildren, and 12 great-grandchildren.

Cremation has taken place. A memorial service will be held at a later date. In remembrance of Jack, charitable donations may be made to St. Alban's Episcopal Church, 1126 US-16, Worland, WY 82401.