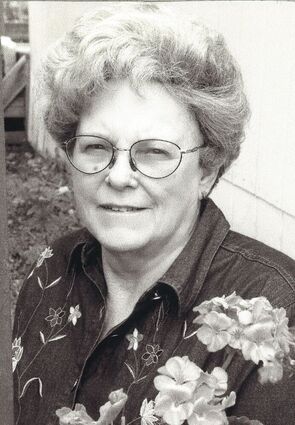 Lenora Marie Walker, 94, passed away peacefully at her home in Worland on November 15, 2021.

Lenora was born on August 15, 1927 in Maysville, Oklahoma. She was the second child and oldest daughter born to Lee Roy and Johnnie Belle (Caton) Smith. She joined big brother, Eugene at this time; Naomi, John, Shirley, Bill, and Franklin would come along later. Lenora grew up and received her education in Maysville. She married Perry Gregory Walker on August 6, 1947. The coupled moved to Wyoming where Perry held a variety of jobs. Lenora was content to stay home and raise their children, Linda, Judy, Mary and Melvin. She and Perry taught them the value of hard work which they often learned helping their parents out in the fields, tending to crops and weeds. She also took them to church each week to see to their spiritual well-being. As the children got older, she decided to sell Avon products. She even got her driver's license after Mel was born to assist her with her new career. Not only did this get a quiet, shy lady out of her home, but it made her interact with others, talking about products she enjoyed. It also gave her a little spending money. Later in life, she worked as a librarian at the Wyoming Boys' School. She also helped out at Mildred's Dress Shop, downtown Worland.

Lenora knew the importance of volunteering to help her community grow. She served as a "Grey Lady" at the hospital, served in various capacities at church including a Sunday School Teacher, and later became a Foster Grandparent in the school system.

Still very much a homemaker, Lenora would spend hours sewing clothes for her children when they were young, seldom using a store-bought pattern. Her ideas were kept in her head, and the results were beautiful. She taught her daughters how to cook and repair clothing (although she did most of the repairing). She had a splendid green thumb when it came to growing irises and roses. They beautified her yard each spring and summer. She was an accomplished gardener in other areas also. She enjoyed painting, crocheting, making dolls, ceramics, interior decorating (wallpaper was not meant to stay up very long!) and writing letters to the many pen-pals she had. She and Perry enjoyed the company of friends, playing dominos and square-dancing.

Lenora was a quiet person who often reflected on the great teachings of her Grandpa Caton. She remembered how special it felt each Christmas growing up when there was a doll under the tree for her and her sister. Grandpa Caton always made sure of that. After Perry passed away, Lenora seemed to bloom; gone was the quiet 'behind-the-scenes' lady and out came a more outgoing individual with vitality and laughter. The hard work was finished and now she could enjoy the fruits of her labors. She loved her family; they meant everything to her. She loved the Lord and it showed in her life-long service to others.

Memorial services will be held 10:00 AM, Friday, December 3, 2021 at the Crosspoint Baptist Church – Washakie Campus (821 South 15th Street) in Worland. Inurnment will follow at the Riverview Memorial Gardens Cemetery. Memorial donations may be made to "Eden's Gift" (A ministry to help moms and dads with unexpected pregnancies find support and hope through Christ). These donations may be sent to PO Box 524, Worland, WY 82401. Online condolences may be made at http://www.bryantfuneralhomeonline.com.