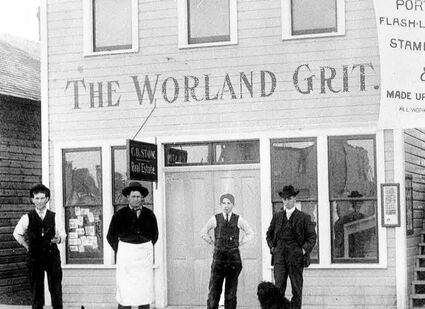 The 1906 Worland Grit employees "Johnson," "Holtz," "Howell" and "Stow" in front of the original newspaper office.

WORLAND – For over a century, Washakie County has been distributing a newspaper to its community. However, with over 100 years under their belt, it's only natural the paper would experience plenty of changes, adjustments and a couple of complete conversions.

Soon after the first issue of the Grit was published, it was sold to A.G. Rupp and C.F. Robertson. Charles Rupp, a printer and brother of A.G. Rupp did the typesetting while Tom F. Daggett, the editor and founder of the Worland Grit and an old newspaper man from New York looked after the news and editorial departments.

According to washakiecounty.com, Tom Daggett was a "real character and an all-around newspaper man, a fluent writer of unusual talent and a fast typesetter as well." Daggett worked on many other newspapers in the Big Horn Basin. He was described as "frail of body but very keen of mind."

Daggett was the editor of the Worland Grit. According to "Wyoming Newspapers: A Centennial History," he had visions of publishing a daily newspaper in Worland to serve the entire Big Horn Basin. Unfortunately, his passing in 1910 prevented him knowing his dream came true.

The Grit, being printed in 1905 at 616 Big Horn Ave., was just in time for the 20th century's era of mass media. At the time, newspaper sales grew.

This was possibly triggered by the onset of newspapers flourishing dramatically in the early 1800s. According to americanantiquarian.org, by the 1830s, the United States had around 900 newspapers – about twice as many as Great Britain. It also had more newspaper readers as well. The 1840 census counted 1,631 newspapers. By 1850, the number was 2,526 with a total annual circulation of half a billion copies for a population of a little under 23.2 million people. Some causes of this newspaper boom involved public policy choices at the highest level of government. Like The Grit, most of the newspapers were weeklies.

The Grit was published in time for Camp Worland to prosper into a community with a school, church, post office and a general store.

At the time, the camp had a population of around 265 residents.

According to washakiecounty.com, it would be the year following the first publication of the Grit that Camp Worland moved the community across the frozen Big Horn River after the coming of the railroad. The newspaper was moved over to the new town in the winter of 1905 and 1906 and continued its publication under the same management until W.G. Johnston took over ownership in 1906.

A new power press was purchased Aug. 12, 1911. R.G. Culbertson, the town clerk at the time and Cloud Peak Lodge Secretary obtained half-interest at the same time, probably given to the fact that he specialized in insurance. The new power printing press was installed in the basement of the Stockgrowers Bank over a year later on Nov. 28, 1912.

An era seemed to end on Dec. 17, 1932, when the owner and publisher, W.G. Johnston passed away. Johnston had owned The Grit for 20 years at that time, and had been working there for 25.

"The deceased had gained distinction of being the dean of Worland business men, the Grit being the oldest established concern under same management now in operation here and among the newspapers over the Grit has been under the same management longer than any other publication," read a memorial in the edition of the Grit Dec. 22, 1932.

"In the great plan of things, the editor, our employer and friend, has been called by "The Master Printer" to work in the celestial shop and it falls to our lot to carry on for now his work that has been a vital part of the community," the Grit read.

For the 25 years Johnston worked on the Grit, his column had been known to reflect "his wisdom and love."

Many newspapers from around the state published ads and small stories through associated press in remembrance of the deceased editor.

For another seven years, the Grit would publish under the publication and management of Johnston's wife, Winifred.

"The Worland Grit which you read today marks the end of this newspaper as a weekly publication," read the May 25, 1939, Worland Grit.

After seven years of managing and publishing the Worland Grit, Winifred Johnston sold the newspaper to Tracy S. McCraken and Ted O'Melia. After 33 years as a weekly paper, the Grit, now known as the Northern Wyoming Daily News was a "modern and complete daily newspaper."

The Northern Wyoming Daily News was the only daily newspaper published in the Big Horn Basin, providing residents of the area a news service that had long been in demand.

"The first thing every morning, except for Sundays and Mondays, this paper will bring you the highlights in the news of the Big Horn Basin, state and nation," said an article from the first publication.

"No effort, nor expense has been spared in making the Northern Wyoming Daily News an outstanding paper – a paper that can be read and enjoyed by every person in the Big Horn Basin."

With the change from a weekly publication to a daily, there came a new era. Writers experienced deadline changes and other new responsibilities.

According to "Wyoming Newspapers: a Centennial History," writers had included Robert Johnson, who was hired as news editor, and Elmer R. Downing, who was brought in as circulation manager. Downing also worked as an advertising manager, general manager, interim publisher and associate publisher. He retired in 1986, but returned to work part time from 1988 to 1990.

The Daily News was handed down to Hugh F. Knoefel by O'Melia in 1946 when he became the publisher of the Rawlins Daily Times.

A reporter from the Daily News, Helen Shoemaker received United Press wire service news over the telephone. She was also a popular columnist whose column appeared in the front page of the Daily News, stated "Wyoming Newspapers."

Years of daily newspaper files and back even further through the Grit, the lives of people of the Big Horn Basin were chronicled.

"Wyoming Newspapers" said The Daily News printed updates and news of three major military histories, World War II, the Korean conflict and the Vietnam War. Nine members of the Daily News staff were called to action during World War II, while others remained behind, reporting progress of the war and the news of those missing or killed in action.

The Daily News skipped a publication day on August 17, 1945, to honor the end of the war.

Other headlines to shake the world, published by the Daily News, included the announcement that the Salk Vaccine had promised an end to polio, the disease ravaged most children. Greybull had been hit with 23 cases of the illness, two of them fatal.

In 1955, the Daily News met a new milestone when the decision was made to move the publication from its location at 724 Big Horn Avenue to a larger facility. The newspaper's corporate stockholders purchased the building housing Davis Lumber Company at 723 Robertson Avenue/201 N 8th Street. The task of moving was carried out in 1956.

Almost 10 years later in 1964, the Daily News was nearly put out of business due to a major fire. A building adjacent to the news office burned to the ground. Daily News personnel and others helped evacuate the building and remove all valuable files and records. The office was saved by a masonry fire wall with only smoke and water damage sustained.

Hugh Knoefel retired as publisher on June 1, 1984. After 38 years, Bill Fredrick was named to succeed him. Fredrick remained as a publisher until his death Oct. 9, 1988.

Editors, reporters, office workers and production people came and went from the Daily News, but the basic philosophy has never changed – to provide the people of the Big Horn Basin with the latest news of their neighbors, their state and the world, to the best of their ability.

Robb Hicks and Gary Stevenson, owners of the Northern Wyoming Daily News have both won state and national awards for

Hicks and Stevenson believe in wanting to have a local paper in Worland and one that would celebrate life in Washakie County.

Staff at the Northern Wyoming News continues to work to cover the same local news and area news and chronicling the events and people of Washakie County and the surrounding area.

Individual newspaper prices increased to $1, which is consistent to many other weekly newspapers in the surrounding area. The Grit had cost five cents for a single copy, and $2 for a yearly subscription.

The inaugural edition of the Northern Wyoming News was published Feb. 7, 2019. The paper continues the tradition of more than 100 years of chronicling the life and times of the people in Washakie County and the Big Horn Basin.

Editor and General Manager Karla Pomeroy wrote in her column in the first edition of the paper, "You see it doesn't matter if a newspaper shows up in your mailbox once a week or five times a week. What matters is if the newspaper is doing its job."

Over the years, other newspapers have come and gone throughout the community.

This includes the Washakie Signal Fire. Having been dubbed "a little high school sheet" and given three months' existence, the Washakie Signal fire beat their odds when they lasted close to four years before selling out "lock, stock and barrel" to the Northern Wyoming Daily News. 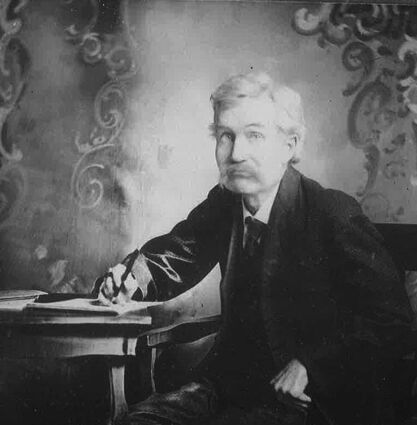 Their efforts centered on local news, promoting growth and activities in the community endeavoring to tend and nourish the "spirit of Worland and Washakie County, the spirit that made a sage brush and alkali flat, inhabited chiefly by rattlesnakes, rabbits and prairie dogs, into the beautiful green valley that thrills us whenever we have been away and approach the town from any direction," according to an article in the last issue of the Signal Fire.

"With a lump in our collective throats, we stop the press," signed off the column by Bill and Ruth Black, Helen Howell and Over Morgan.

Other newspapers included a paper published in Ten Sleep known as "The Pioneer," published from 1992 to 2001.