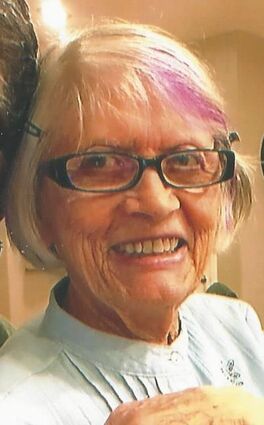 She attended Wayne High School, where she was proud to have been voted head cheerleader.

Jeannie married Alvin Griffin of Escalante, Utah on May 5, 1950; they later divorced. They had 3 daughters: Vicky, Cindy, and Karma.

Jeannie attended Darrel's Cosmetology College in Salt Lake City and began her career as a cosmetologist licensed in both Utah and Wyoming,

Jeannie married Herbert J "Jack" Dalton (deceased) in 1962 in Thermopolis, Wyoming and made their home for the next fifty-plus years in Worland, Wyoming. They had a daughter Donna and a son John.

Jeannie spent most of her life in Wyoming, opening her own business, and raising her children. She moved back to Bicknell in 2014. Jeannie had a kind and giving heart. She loved to laugh. Her laughter and sense of humor will be missed. Like her mother before her, she was a beautiful seamstress until losing her eyesight to macular degeneration. She loved her grandchildren and great-grandchildren with her whole heart and was happiest when they were around. She loved music and never passed up an opportunity to dance – she was a very good dancer. She was not so crazy about cooking, but according to her daughters she made the best pumpkin pie "in the world", and her chicken soup with homemade noodles and mashed potatoes was always welcome comfort food. She leaves a hole in our hearts.

The family would like to extend a special thank you to the Mission at Community Rehab of Centerfield, Utah, and Gunnison Hospice for their tender care of Jeannie during her last years and days. Also, thanks to Springer Turner Funeral Home for all their help during this trying time.

In lieu of flowers donations may be made to Alzheimer's Association (act.alz.org).

Burial will be in the Bicknell Cemetery under the care of the Springer Turner Funeral Home of Richfield and Salina, Utah.

On line guest book at: http://www.springerturner.com