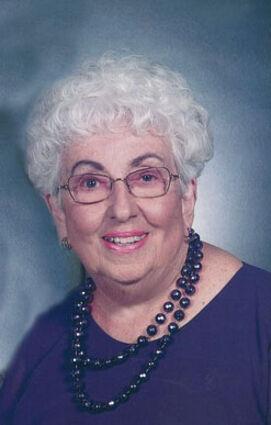 Evelyn "Lynn" Krei passed away January 28th, 2022, in the loving presence of her children, at Spirit Mountain Hospice in Cody Wyoming, following seven years of exceptional care at Willow Creek Facility in Worland.

Evelyn Edwards was born December 15, 1926 in Amagansett, Long Island, N.Y. to John and Elizabeth Edwards, the youngest of their 5 children. The family moved to Miami, Florida in the early 1930's where they lived during the Depression.

From 1947 to 1952, she worked as a legal secretary until she married Ronald Krei in June of 1952. They lived in Minneapolis, Minnesota where Ron was stationed with the Marine Corps until his honorable discharge later that year.

After Ron's discharge, they moved back to Ron's hometown of Worland to be in business with the Herman and Helen Krei Dairy Farm on West River Road. Lynn was contented to be a farm wife and mother to their three children, Kathy, Lee, and Donna.

When the children all entered school, Lynn went to work for the Worland/Ten Sleep Chamber of Commerce in 1962 where she was office manager for twelve years. Working with the businesspeople of Washakie County and wearing a red Chamber ambassador coat in those busy years was both interesting and exciting to Lynn.

During this time, Lynn's interest in interviewing and recording oral histories of pioneers in the area began. Her efforts resulted in the Oral History program of the Washakie Museum from 1986-1989.

As a highly organized woman, Lynn used those skills as the director of the program in conjunction with the Wyoming Council for the Humanities. Over 130 pioneers of Washakie County were interviewed.

The pioneer stories are in the Washakie Museum and copies are in the archives in Cheyenne. Many historians and authors have used, and continue to use, these documents.

From 1973 to 1975, Lynn worked with the Remedial Reading program at the Wyoming Boys' School. From 1975-1986, she worked as a receptionist/bookkeeper for Dr. Edward Horsley, M.D.

Family and church activities were a top priority over the years before retirement.

Having a strong Christian faith, Lynn taught Sunday school and Bible study in the Methodist church. As a trained Stephen Minister, she never hesitated to offer food, assistance, and Christian companionship through the Helen's Fellowship to people in need.

Memorable moments were created for the Krei family when they traveled by tent-camper and RV on family vacations to many parts of the U. S. and Canada. They also enjoyed summers at Boulder Park in the Big Horn Mountains for over 25 years of fishing, hiking, and camping.

Mesa became Ron and Lynn's winter home for the next 17 years. They purchased a small home in an activities park and pursued their hobby of square, round, and ballroom dancing on a daily basis. Lynn also enjoyed swimming, golf, ceramics, and painting. The couple was blessed with good health and a long, wonderful retirement together.

Lynn's passion was dancing. As a shy teenager, she gained her confidence in life by dancing in the U.S.O. dances during WW II where she learned the jitterbug and competed in many dance contests. During retirement, Lynn taught dance classes to women in Worland.

Lynn's legacy has been her drive to start and end each day with projects and activities filled with love for her family, friends, and those in need. Thus, she lived a life full of contentment.

A celebration of Lynn and Ron's life will be held on April 23, 2022 at the United Methodist Church in Worland, Wyoming with Pastor Kayilu Pfoze officiating.

Lynn has requested any memorials be sent to the United Methodist Church. Checks may be sent to P.O Box 524 Worland, Wyoming, 82401.

Online condolences may be sent to Bryant Funeral Home at http://www.bryantfuneralhome