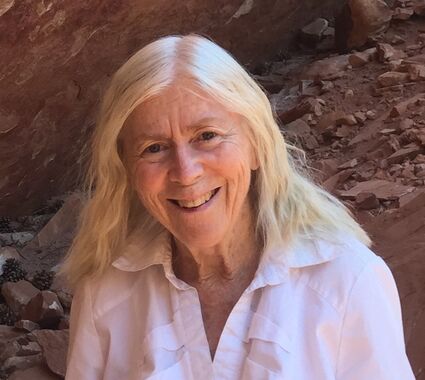 Peggy Ann Tolman was born in Harford, CT, on March 31, 1945 to Margaret (Peggy) Quinn Tolman and Myron Dean Tolman, a navigator in the Army Aircorp mapping Africa during WWII. After the war, Dean was finally able to meet his six-month-old daughter and the young family returned home to Wyoming and the Tolman Sheep ranch. Through her childhood in Washakie County, Peggy developed her sustaining love for the mountains and its wildlife and livestock. Her first mourning was over the bodies of beloved bum lambs and wild rabbits.

Peggy graduated as Valedictorian from Worland High School in 1963. With a dream of becoming a doctor in a time when few women did, she enrolled in a science-geared curriculum at Creighton University in Omaha, NE. There, David Beacom joined the sharp-shooter club so that he might meet that cute red-head. David became her first husband and father of their three children Amy, Dean and David. Peggy graduated with honors and a degree as a Medical Technologist. She worked in bacteriology in various hospitals for twenty years. In 1978, she and David moved the familly to Denver, CO.

On a retreat in Scotland Peggy was called to create a welcoming home to support life transitions, particularly birthing, aging, and dieing. She invisioned honoring the Celtic tradition of the Anam Chara, the soul friend – the woman in the villages who was both the midwife at birth and deathbed attendant and keener. She established three elder-care facilities where, over the next thirty years, she cared for and honored elders in their final years and helped prepare them for their deaths. Peggy chose to take the last name of Quinn, which was her mother's maiden name. She has been known as Peggy Quinn ever since.

She met her second husband, Donald Henderson in Crestone, CO where he was a practicing Buddist monk living in silence. They realized their soul-connections in each other and found a way to live together that honored both Don's need for solitude and Peggy's need for connection.

When her father Dean Tolman needed care, Peggy bought a home in Ten Sleep with the intention of establishing an Anam Chara facility there. She moved her father to Ten Sleep and envisioned Dean's being joined by other ranchers in their wisdom years after being "put out to pasture." She knew how much that view of red clay buttes and Big Horn Mountains would mean to everyone who had worked in them. Although that dream did not come to fruition, she loved being in Ten Sleep where she left a piece of her heart.

In her later years, Peggy was diagnosed with Frontotemporal Dementia, which she navigated with confusion, frustration, excentricity, humility, grace, and ultimately pixie-like exuberance. She turned her struggle with dementia into another learning experience and demonstrated her tenacity through incidentts that others might never have survived. Through her disease Peggy danced and found joy in life, even in the midst of tragedy.

In her final years Peggy was lovingly cared for by her son Dean, "daughter-in-love" Jessica and their daughters. Of all of her accomplishments, nothing made Peggy more proud than her family – her three children Amy Beacom (Mike DeMezza), Dean Beacom and David Beacom, her four grandchildren Luca and Maggie DeMezza, Lilly and Piper Beacom, sister Maureen Flannery (Dan Flannery) and half-sister Anita Hinton, five nieces and nephews Jalan Crossland, Tolman, Brendan, Brian, and Caitlin Flannery.

On January 24 Peggy died peacefully in her Boulder home in the shadow of the mountains surrounded by the love of thirteen family members who gave her the beautiful death she so richly deserved.