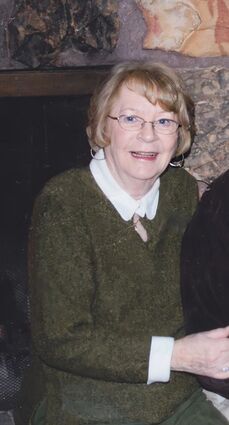 A love story over 80 years in the making finally reached its closing chapter this year when beloved wife, mother, grandmother and great-grandmother Bonnie Jean McKibbin Donnell passed away in her sleep on Tuesday, February 1, 2022 in Cheyenne, Wyo. She was 92 years old.

Bonnie was born on August 16, 1929, in Kewanee, Ill. to Jeff "J.R." and Rubye McKibbin. The family moved to Worland, Wyo. in 1932, where Bonnie met her future husband Jack Donnell when they were both just three years old. In a Valentine's Day interview with the Wyoming Tribune-Eagle last year, they told a characteristic story of their early friendship: Little Bonnie told Little Jack that she didn't think he could throw a rock far enough to knock out a streetlight. When he accepted the dare and broke several, Bonnie told his parents about his naughtiness.

Romance didn't officially bloom until years later, after they graduated from Worland High School in 1947.

The couple were apart for a little while before tying the knot, however. Jack went to the University of Wyoming. Meanwhile Bonnie, having grown up with Worland's Golden Rule department store (JC Penney before it was JC Penney), which her parents owned, let her interest in clothing and fashion (and the necessity of flying in a plane to get there) lead her to Lindenwood College in St. Charles, Mo. to study fashion merchandising. While there, she got a chance to try modeling when she appeared in a televised fashion show wearing a garment of her own design. She would later tell her children that her TV appearance let her wear black lipstick long before it became cool, because it was necessary for her smile to show up on black and white televisions.

Never forgetting her childhood friend and high school sweetheart, though, she only stayed at Lindenwood for one year before transferring to the University of Wyoming to "keep an eye on Jack." While there, she was a member of the Delta Delta Delta sorority.

Bonnie and Jack were married on June 11, 1950 and returned to Worland after Jack finished at UW. In Worland they started a family, eventually raising five children together while Jack operated Donnell & Associates, Inc. and Bonnie laid plans to eventually open The Movie Center – the first such establishment in the Big Horn Basin – turning Bonnie's life-long love of movies into a business which she largely ran. The move sent the couple to numerous trade shows in Las Vegas over the years and gave them a taste for "the Las Vegas life," which they liked so much they chose to retire there years later.

Bonnie and Jack were active in St. Alban's Episcopal Church throughout their years in Worland, with Bonnie serving on the Altar Guild and volunteering to lead children's activities for the church.

She was also active in PEO Chapter AA and hosted bridge games throughout her Worland years.

Bonnie and Jack retired to Las Vegas, Nev. in the mid-1990s, where they lived for ten years before returning to Worland. They settled for good in Cheyenne, Wyo. in 2017.

Bonnie enjoyed playing bridge, reading, and, true Wyoming girl that she was, spending weekends in the Big Horn mountains, where she loved to go horseback riding as a girl and learned to fish very well, helping her children learn to love the sport, too – even if she had to bait some of the more squeamish kids' hooks for them.

She and Jack also enjoyed traveling to Hawaii and to Europe.

Bonnie was preceded in death by her husband Jack, her parents, Jeff and Rubye, and her sister, Caryl Ann McKibbin Winterholler. She is survived by her five children, Jeffrey (Deb), Michael (Mary), Kimberly (Terry), Timothy (Debbie) and Traci; 12 grandchildren, and 12 great-grandchildren.